A 25 km run this morning took my total for the first five days of this week to 105 km. I think my base fitness will be fine for the 50 km later this month. It’s now just a matter of increasing my speed.

Readers may recall my crash on the bike in Mudgee three weeks ago. I landed on my right hip and ever since it’s been sore. However, it seems to have become even more sore, although I might be imagining that. At the very least, the soreness has not abated. A couple of informed opinions have suggested that I may have chipped a small bit of bone off the point of my femur. Anyhow, it’s only sore when I push on it, or when I roll on to my right side in bed. It doesn’t effect me at all when I’m running, so that’s a bonus.

Here’s a photo taken the afternoon I ran in the the French town of St Affrique. We’d been there a year and a half earlier on a cycling trip, staying at a lovely place called Domaine du Vern. We again stayed there on this occasion, catching up once more with hosts Laurence and Stephane. 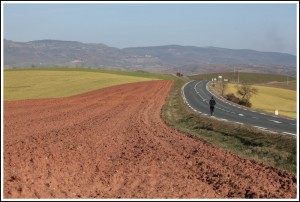