Normally I would have done s speed work session this morning, but I wasn’t at home and, therefore, away from my usual courses (of which I know the distances precisely). So, instead, I had a very enjoyable run from Kiama to Jamberoo and back on a beautiful mild sunny morning. The countryside was very green and sky completely blue. It would be hard to enjoy a better run.

Tomorrow I’ll do some speed work instead, ahead of a 50 km training run on Saturday. I’ll then have just two weeks of sharpening up, then tapering for the event on April 30. I haven’t decided what time I’ll aim for in that 50 km. Perhaps I won’t have a time in mind at all. It’s actually a marathon race, but I’m going to keep running and extend it to 50 km. I might just “see how I go”.

Here’s another photo of me running over an ancient bridge. This one was in a remote part of western Spain. It could easily be  a Roman bridge, given its age and style, along with the fact the Romans were very prevalent in this region. I often stumbled upon things like this while running around the world. 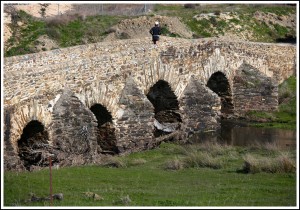 Pretty much uphill all day, but that’s the way I like it (so long as it’s not too steep). I am finding that my legs feel much better after a day of uphill than a day of downhill – so much less impact shock over the course of the day.

I spent the first part of the day running across and out of Albuquerque. I really love the architecture in this city. It’s a brilliant mix of Native American and Spanish influences, and is very aesthetically pleasing.

I forgot to mention yesterday that I ran into the city on the old Route 66 (until I got to the cycle path by the river). This road used to be an extension of the Santa Fe Trail for wagon trains, and prior to that it was the Camino Real (the Royal Road – the most northerly part of the Spanish road leading up from Mexico). It became part of Route 66 when cars came into vogue. However, in 1937, a new road to the east of Albuquerque took over as Route 66, and this was the road I ran out of Albuquerque on today. Wow, two different Route 66s in two days.

I also passed 3000 miles today. I have a few more milestones approaching in coming days.

I would also like to point out, in case you haven’t already visited it, the Travel Log section of the web site. It’s on the bottom left. The support crew have compiled this list of interesting venues. They are worth your consideration if you happen to be visiting, or are just plain worth reading about if you aren’t.