I’ve had a good time running in Monaco these past three days, on each occasion passing the  Monte Carlo Casino. It’s a very hilly place so there’s been plenty of up and down. Each day I headed down to the harbour and around the lower streets, before running back up the hill to my hotel. The officials are preparing for the Monaco Grand Prix, and there’s a huge amount of temporary seating down on the waterfront. By the way, I met Prince Albert the other day, and sat next to the Foreign Minister of Monaco at dinner in the casino. It’s not running news, but I thought I’d mention it anyway.

Believe it or not, this photo was taken at an altitude of 8,000 feet in the Colorado Rockies. The whole day of running was virtually dead flat and along a totally straight road, as evidenced in the photo. The region is a high plateau and not unlike a desert in places. 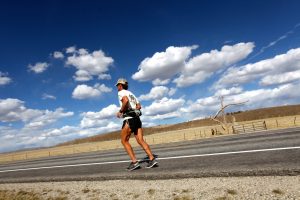 It was the “Day of the Depleted Batteries”. Not only did my GPS watch battery give out earlier than normal, but my phone inexplicably did too. And they were just the electronic batteries – my own internal battery was running low as well. I just didn’t have it today; not at the start, and certainly not at the end.

I’m not sure of the reason for all these battery issues – perhaps it was due to solar flares. Just a theory, especially as my auxilliary Garmin took forever to find the satellites. Satellites are often the most vulnerable during unusual solar activity.

I did pass the milestone of 3,000 km in the US today, but it was otherwise a bit of a slog. The small town of Madrid is definitely worth a look if you’re in the Santa Fe area.

That’s all for now. Tune in again tomorrow for the next instalment.