As part of my run yesterday I did a 3 x 1 mile speed work session, with a 600 metre jog in between each. When I’m training for shorter races I do these miles quite fast – and it hurts. For example, last June I averaged 5:18 for the three miles, and my lungs were bursting. However, I’ll be running a lot slower in the 50 km I’m doing on April 30, and there’s not a lot of point in going too fast in training.

So yesterday I averaged 5:54 for the miles, with the fastest being 5:43. The difference was I felt completely comfortable throughout. No pain or gasping for breath. It was more than an adequate pace for the event I’m running, and the session had another advantage. When a session hurts a lot, it leaves you a little mentally scarred for the next time you do the same session. When it feels as comfortable as yesterday, you feel much more enthused to get out there and do it again in the near future. This effect is important over time, keeping a runner psychologically fresh.

Today’s photo sees me running through a vineyard in central Portugal. This was just days after I began the European leg of my world run. And each evening Carmel and I enjoyed a bottle from local vineyards just like this one. 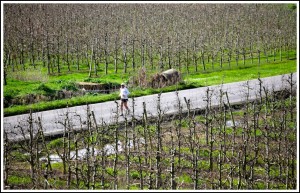