I’m now back home after a 36 hour door to door trip from Monaco. Eight of those hours were spent in airport lounges, so I had plenty of time for my specialty – of running around airports during stopovers. I’m glad places like Singapore Airport have such long corridors, as it enabled me to get in several kilometres. And it was a good reason not to indulge too much in the food and red wine in the lounges.

Now I have to knuckle down and really start training for the Big Red Run at the end of June. I only have about two solid months of training to get myself in shape for this most unusual of events. I’ve never run a multi day stage race before, so it’s going to be new ground for me to cover, both literally and figuratively. I got off to a good start with a 20 km run this morning.

This is another photo from when I was running in New Mexico during my run around the world. Despite the remoteness and sparseness of the vegetation, running in deserts is rarely boring. 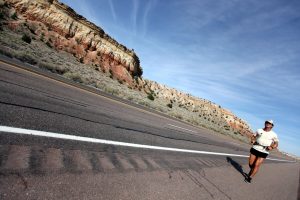