After two weeks where I ran 70 km in each, I’m off to a flying start this week with a fast 24 km. I averaged under 5:30 per km, with the last kilometre in 4:56. And I’ll probably add a bit more with a light run later today.

It’s time to really start putting in an effort for the Big Red Run. I have less than nine weeks of training, which is plenty of time because I have a good base. But the event is extreme, so I want to be in better shape than normal, mainly so it doesn’t feel as painful as it would if I was less fit.

This photo was taken by Carmel in New Mexico during my run around the world. The guy with the TV camera was doing a story on me for one of the Albuquerque television stations. It appeared on the evening news later that day. 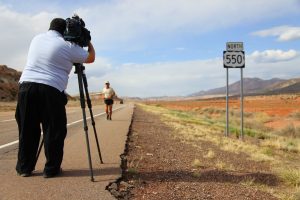 The weather was perfect today – it made me remember why I’m doing this run.

Early on I passed 2000 miles run in the US. At the 26 km mark I crossed the border into Colorado. The girls dropped some lunch off for me on the side of the road at the 43 km mark – Beanie Weenies, a chocolate bar, and a coke. It might not score too highly on the nutritionists’ scale, but you have to take what you can get in the more remote parts.

This whole region that I’m running in at the moment is on a vast plateau known as the American Tibet. It’s essentially a huge flat plain situated about 8,000 feet above sea level, punctuated by peaks that reach into the sky as high as 14,000 feet or more. There are snow-capped mountains on the horizon in just about every direction.

Tonight I’m in the town of San Luis. It claims to be the oldest town in Colorado. There is no internet at the hotel, so I have had to go down the road and sit outside a café where there is a wireless signal. Once again, there are two Garmin files for the day.

Back on the road today, and this time with my mates Dave and the Hud. It was warm again, in the low 20s. But let me firstly fill you in on the past day or so.

We met up with Jo, Dave, Sue, and Greg (The Hud) on Monday night in Vienna, and spent the next morning with them, looking around the city. We then all travelled to Bratislava, in Slovakia, yesterday afternoon. Last night we had a great evening in this, the smallest capital city in Europe. It has a long history, and a wonderful “old town” area, where we enjoyed various local beers and wines. Some of these were in odd shaped glasses, like boots. Have a look at the photos, and you’ll see what I mean. It was a great evening.

This morning, I travelled with the guys to my finishing point from Monday, and headed off in the direction of Budapest. Both the guys ran about 21 km with me. They were very pleased to get half marathons under their belt on the first day.

It was a very flat day, some of it on cycle paths, but a lot of it wasn’t. It was not the easiest day of running, but the guys did well.