After my 12 hour 114 km run last August, I ended up with a slightly sore heel. It was nothing much, but I regularly felt a bit of a sting down around the very bottom of the heel. This persisted for many months while I was taking it easy. Strangely, it completed disappeared for a couple of weeks from the moment I ran the King Island 32 km race.

Usually injuries get better when you rest and worse when you race. This one did the opposite. And, as I rested for a few weeks after the most recent race, the issue started to reappear. Yesterday, however, I ran a 1 km circuit in 3:31 (just to keep my speed from fading too much), and the heel problem has disappeared again. It seems that running fast causes the issue to go away, and resting allows it to reappear. Very odd.

Anyhow, I felt very comfortable running the 1 km in that time. I really don’t need to do much in the way of speed work ahead of the 250 km six day stage race in the Simpson Desert, but I will continue to do something as simple as a 1 km time trial once per week. I’ve always found that a little speed benefits a runner, even if they’re only training for a very slow paced race.

This photo was taken in the studios of a Phoenix TV station during my run around the world. Just before this, a similar interview screened featuring Joe Nicholls, a leading US country musician. A few weeks ago I told the story of how the girls met Joe in the green room during my interview (Carmel too this photo of the TV monitor while in the green room) and they had no idea who he was. Scroll back to that post if you want to be refreshed as to the story. It was quite funny. 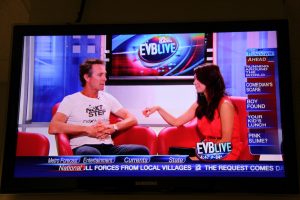