Running never fails to surprise me – at least from time to time. Readers may recall me running a series of laps of Centennial Park over a period of a few weeks back in late January and early February. For the record, I did these in 18:30, 17:42, 17:11, 16:12, and 15:35 in consecutive weeks. Then the Achilles gave me problems again and I haven’t run a lap of the park since.

After the Anzac Ultra, where the Achilles objected to the unevenness of the trail, I have been taking it easy. The Achilles has responded well to the rest and even surfaces on which I have been running this past two weeks. It was feeling quite good early in my run today and I was in Centennial Park. So I thought I’d time myself over a short section, just to see how the Achilles handled it. It was still feeling good at the first checkpoint, so I decided to continue. It was a similar story at the second checkpoint. And the same after that. So I just kept running (like Forrest did).

The whole time I was running within myself, with no issues for the lungs. It was actually very easy, with neither the cardiovascular system nor the Achilles objecting in the slightest (clearly the problem in the Ultra was due to my not being used to the uneven trails).

I finished my lap today in 14:51 (3:54 per km pace), feeling hardly out of breath at all. I could have run quite a bit faster if I’d chosen to do so. I couldn’t believe it. This is only two minutes slower than my all time best, set 25 years ago, yet I’ve done no speed work for nearly nine months. And it’s only 51 seconds slower than the fastest I ran last year, which was after three months of speed work, and just before the City to Surf where I  tore the Achilles.

If I can achieve this today, with no recent fast running yet doing it so comfortably, it augurs very well for my attempt to “beat my age” at the City to Surf this year. And I’ve been granted a Preferred Start for the race, so the scene is now set.

Today’s photo from the world run is from San Francisco, taken just after I had started the North American leg. There is so much to see when you run around the world. 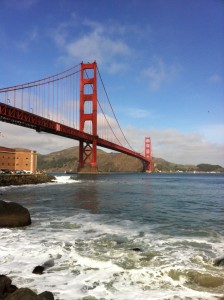 I am on my way to Colorado Springs, and today I could have taken a more direct course. Instead, I chose to go via Fairplay which, at just over 3,000 metres in elevation, is the highest town to which I’ve ever been. It’s almost twice as high as the highest town in Australia.

Being in the Rockies, I really wanted to reach at least 3,000 metres in elevation. As I mentioned, I’m not shirking the hard stuff, and will be going even higher, quite significantly so, when I cross the Andes in late November. Having also crossed the deserts of the US, I’m also looking forward to running across Australia’s Nullarbor.

It was a long day, fighting the traffic on narrow roads, but the continuing good weather helped. Right near the end of the day, I crossed the border from Hungary into Serbia. It was interesting, as I run up to the window next to Carmel, who was driving. The border guards don’t get many people approaching their windows on foot.