I finished last week with a total of 120 km, and I’ve kicked this new week off with a 30 km run this morning. I’ll probably add a little to that total later this afternoon. As I mentioned last week, my training philosophy is that a “tired” run in the afternoon at a slow pace will get me used to the sort of fatigue I expect to feel in the Big Red Run two months from now.

On the topic of that race (250 km in six stages over six days), I’ve been trying to estimate the total time I expect to run. Given the extreme nature of the event, and the consequential fatigue and slowing pace I expect will occur, I think a really good time would be around 25 hours. I really can’t see myself being much quicker than that.

Here’s a photo from when I reached the top of the Poncha Pass in the Colorado Rockies. It’s not too much short of 10,000 feet in elevation. A couple of hours later I was in Salida, enjoying that giant margarita I posted a photo of a few weeks ago. And it was right around this time of the year five years ago. 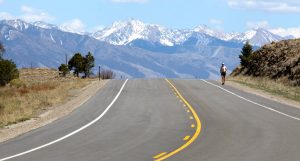 I’ve had many questions pertaining to when I’ll be passing through Denver. If you’re interested, stay tuned to this site for updates, but the best estimate at the moment is around April 30. Anyone wanting to come out and run with me, you’re most welcome. I should have T-Mobile reception again by then, so the tracker will be working constantly, and you’ll be able to pin-point my position throughout the day.