I ran 100 km last week, but this week will be less. A few short sprints yesterday, some bounding today, and the remainder of the week until Saturday will be a case of winding down. The last thing I’d want is to go into a 50 km event feeling tired. As I’ve stated before, the marathon part of what I’m running is actually a race. I’m not sure of the standard of the field, but I’m keen to do well.

Here’s a photo of me running across the border from Portugal to Spain during the world run. Carmel and I drove over this same road in 1986 and it was heavily fortified with border check police and the like. Now there’s nothing but a nice road on which to run. 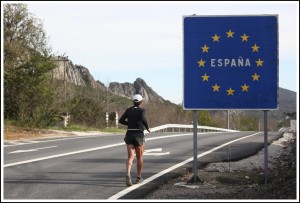 When I crested the summit of Wilkerson Pass this morning, at 2,901 metres (9,518 feet), I thought the rest of the day would be downhill – wrong! After descending almost 500 metres in elevation, the road started up again, peaking at 2,803 metres. As I’ve mentioned before, it’s a good thing I love hills.

At least the long uphill was through a nice gorge, with massive boulders sitting precariously above the roadway. However, the most stunning scenery of the day was provided by Pike’s Peak, which was on my right for much of the day. At over 14,100 feet in elevation, this is one of the most well known mountains in the US, and one of the most prominent. As my old mate, Watto from Wagga Wagga, would say, “it stands out like hog’s jowls”, or something to that effect. Did I get it right, Watto?

Well, Libby has made a nice margarita, so I’m off to enjoy it in the bath.