I had a great run yesterday. I caught the train down to the northern Illawarra and ran up through the Royal National Park. I actually found an interesting new short cut, courtesy of Google Maps. It was an old road north of the Helensburgh Railway Station, which ultimately leads through the forest, over the freeway, and up to the old Princes Highway. But with the recent heavy rains, I found I had to get across four swollen streams. Each time I had to take off my shoes and socks and wade across the shin deep water. At one point I even ran barefooted for about half a kilometre.

After reaching the old highway it was faster going, as I made my way through Waterfall, Heathcote and Engadine, past Sutherland and on to the Relay for Life at Sylvania. I was surprised at the fantastic reception I received as I ran a couple of laps and then gave a quick interview with Reefton Humblewood. Great work, Reefton. In the end I covered a total of 36 km, and all at quite a quick pace (I needed to run quickly as I was initially in danger of not meeting the deadline for arrival at the stadium).

Today’s photo is from the first day of snow I encountered on the whole of the world run, in Arizona. There were so many days of snow to follow in the year to come, mainly in Europe. 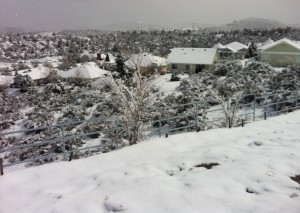 It was a sunny day in the high 20s C, but the lack of humidity made it quite pleasant to run. Tomorrow is predicted to be 30 C. I am wondering what it’s going to be like in a couple of months time when summer really hits (I was soon to find out).

There are freeways pretty much between every main region of Europe now, except for the stretch we’re on at the moment. However, this is being remedied, and we could see where the new section of freeway is being built. It’s a holiday here for Serbian Easter, and there was a guard watching over a big earth-mover that’s creating the new freeway. Carmel happened to take some photos of me, with the machine in the background. For some reason, this was a no-no. The guard came racing up in his car and pulled in front of us, blocking our way. He made it clear there was to be no photos of the earth-moving equipment – I have no idea why? I thought he was going to try to confiscate the camera, but seemed happy with an apology.