With a little trepidation I headed out this morning to test my left heel. After all, it had been less than 48 hours since it had given me quite a bit of grief. But it was absolutely perfect today – not the slightest peep out of it, despite 22 km at a good pace. I even tested it with some sprints over varying distances up to 200 metres or so. Hopefully it was just one of those things and won’t give me further trouble. If I have no more issues with it, I’ll aim to do a time trial on Thursday.

Today’s photo was taken the day before I reached the Rhone River in France. It was a beautiful road on which to run, although tricky when cars were coming from both directions. 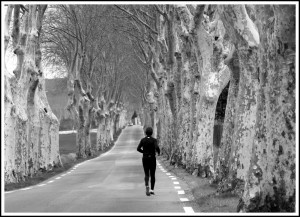 All in all, it was a nice, if uneventful, day. I felt surprsingly good after yesterday’s big run. I’ve now covered more than 120 km in the past two days.

Another very hilly day, and one in which I reached the 11th country of my world run – the Czech Republic, land of Emil Zatopek, one of the world’s greatest ever long distance runners.

And, believe it or not, there was a slight snow fall this morning as I set off. And it’s April!!! It was very cold, with my Garmin again registering sub-zero temperatures while I was carrying it.

The first part of the day was on very quiet roads, with the middle bit on an old rail trail through a pine forest. All the ponds were frozen over. I decided to test how thick the ice was, so I found a big rock and threw it as hard as I could on to a large pool of frozen water. The rock bounced off, merely chipping the ice. I reckon I could have safely walked on that water.

I have also found something quite unusual. When I go in to a shop and buy a drink, it’s actually warmer than the air, despite coming out of the fridge. It feels like I’m drinking a warm drink, because it’s at the 4 C temperature that fridges are normally kept at, which is higher than the temperature I’m running in. Amazingly, the fridges are acting as heaters.

Early in the afternoon I crossed from Germany into the Czech Republic. There were billboards everywhere for casinos just down the road. They must cater to Germans who cross the border to gamble. Unfortunately, after knowing a little Spanish, Portuguese, French, and German, I’ve now reached the difficult stage, as I know absolutely no Czech, Slovakian, Hungarian, Romanian, Bulgarian, or Turkish. The next six weeks will be interesting.

I finally reached my finish for the day in Tachov, where Carmel had had enormous difficulties securing new Czech SIM cards. She finally got it sorted, just as I arrived. We then struggled a little with accommodation, before finding a very nice pension, with a very friendly proprietor. She was most helpful, and her son asked me for my autograph.

One disappointing thing – today my total distance covered in kilometres finally passed the Oxfam donations in dollars. The dollars had always been ahead of the kilometres, but this is now not the case. I hope it’s temporary, so please donate if you can, to help my ratio go above $1 per km.