I’m currently in Washington DC. Yesterday, on my connecting flight from Dallas to here, I had a window seat on a very clear afternoon. I occasionally glanced out the window to look at the landscape below. Most of the time I didn’t know exactly where I was, although the Mississippi River stood out pretty clearly.

Then a region from my run around the world stood out like the proverbial dog’s. I could virtually trace two entire days of running from when I crossed the Kentucky state line into West Virginia. I could clearly see the Ohio River, the bridge I crossed (although it was over a smaller tributary watercourse, the Big Sandy River), through the small city of Huntington with its sorority houses all labelled with three Greek letters, and on the next day to the state capital of Charleston. It evoked such clear memories, including some I haven’t recalled at all since the time I was running there. I was completely enthralled as so many recollections came flooding back.

So now I’m about to go out and run around the city here, maybe even past the Whitehouse, which is just down the road.

I’ve posted a similar previous photo before, but this one is actually slightly different. It shows the Colorado Rockies, looking back toward the town of Fairplay, the setting for the series South Park. I was so skinny at the time, certainly a lot more so than I am now. 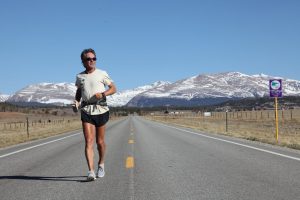