I decided to run a time trial around Centennial Park this morning, following it up with a long run. I don’t normally combine such sessions, but thought I’d give it a go. My justification was that I wouldn’t go too hard around the park, and the long run wouldn’t be too long.

So I ran my lap in 14:43, before finishing with another 24 km. The time for the 3.8 km CP loop was almost exactly a minute slower than my fastest time last year just prior to my successful 54 minute run-my-age effort at the City to Surf. And I was much more comfortable today than I was in that 13:41 effort last year. And the final kilometre was just 12 seconds slower than when I ran my fastest ever lap of CP in 12:50, back in the 90s.

This photo was taken just to the east of the city of Logrono in north central Spain. I enjoyed running the rolling hills you can see in the distance. 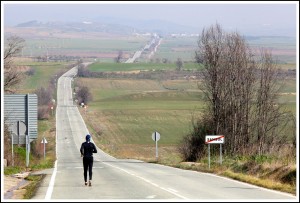 I awoke this morning to grey skies again – no surprise there. But, by the time I walked out the door to start running, it was snowing again. The snow continued, fairly lightly, for the first hour or so, let up for a while, and then recommenced for a short period in the early afternoon. I finished, however, in Prague in a bit of sunshine.

The day was generally uneventful (though Carmel saw a car accident, with a car completely engulfed in flames), as I made my way in to the country’s capital. As I’ve mentioned before, running through the outer suburbs of a large city is uninspiring, but the inner city of Prague is a different matter. It is one of those grand old European cities, and I’m looking forward to exploring it some more this evening.

BTW, this region of the Czech Republic is historically known as Bohemia (as in Queen’s Rhapsody), and it goes back a long, long time. It’s named after the Boii tribe, which settled here when forced north after losing a series of battles with the Romans in the 2nd century BC. The landscape is not as green as I imagined, probably because the grass has been covered with snow for so much of the past several months.

I am now at the most northerly point of my entire world run, just over 50 degrees above the equator. From here, it’s all south.