I’m pleased the coronavirus restrictions don’t apply to exercise. It’s allowed me to get out on the road and log some good mileage. I covered 110 km last week, and should reach 120 km this week. I also threw in a 3:47 kilometre on Monday with little effort. It was my first fast bit of running since the King Island race.

There are three videos today, two of which are from Europe in 2013 – in Prague and Plzen (home of pilsener beer). The other is a news clip from Albuquerque television, filmed north of the city in 2012. I reference Guinness World Records in the interview, only to later become aware that GWR has no jurisdiction over athletic records. It’s actually the World Runners Association that administers records for running around the world.

There are several photos too, including one where Carmel made me wear Easter Bunny ears in the New Mexico desert (recall, I had to do the same in Germany at Easter the following year). There’s also a photo of the TV journalist doing his filming, and another of me looking at the unique clock in the main square of Prague, along with the rest of the crowd. 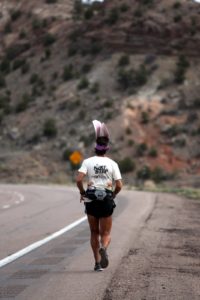 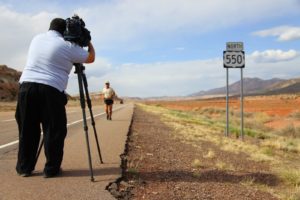 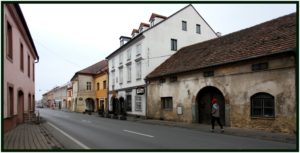