To start, I’d like to congratulate Serge Girard, who finished his run around the world yesterday in Paris. He covered the 26,232 km (he actually ran a few Ks further than that) in 434 days, a new world record, easily eclipsing the times of myself and Kevin Carr. It was a great effort, Serge. Well done.

I’m writing this from Helsinki Airport as I wait for a connecting flight to Paris and then on to Monte Carlo. It’s a pity my itinerary was fixed some time ago and I don’t have time to stop off and congratulate Serge in person.

Travelling creates difficulties for running, especially as I need to get in some type of run during the day in order to maintain my unbroken sequence, which will reach thirteen years in August. In the past I’ve spent time running in airport terminals, though I won’t have to do that this time.

The past two days I ran in the small Connecticut town of Essex. As mentioned last time, Essex was one of the stopovers during my world run. I really like staying at the historic Griswold Inn, which was built in 1776. On Friday I covered the last few miles that I ran into town back in 2012, and then yesterday I ran the first couple of miles along the same route I took out of town the following day. It was a great way to relive the journey. The weather conditions were very similar too.

This photo was taken in Arizona, near the town of Quartzite. Wyatt Earp was the sheriff of Quartzite for a short while. The only proper road across the state in these parts is the Christopher Columbus Transcontinental Highway, which pedestrians are discouraged from using. So I ran on this trail that roughly paralleled the highway. It wasn’t too bad, but I was constantly worried it would peter out. And it did, requiring me to do a few kilometres  later on the freeway. Luckily I didn’t get arrested. 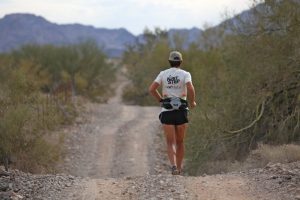