The official race results are out and they confirm my City to Surf time of 54:59. That’s a relief. The race is claimed to be the biggest in the world with around 80,000 participants. I finished in 488th place overall, and 13th in the 50-59 age group. I wonder how many of the twelve in front of me were in the early 50s? I also wonder how many in the race “ran their age”? Impossible for me to tell, as the race results only indicate each person’s age category in ten year increments. But I estimate it’s probably no more than twenty or so.

Achieving the feat by a bare second is satisfying, but not as satisfying as doing it in a convincing manner. But I have future years to do that. If I were to run the same time next year, that would be very satisfying.

The race itself, with its consistent course over the years, is a great way to compare one’s performances as the years advance. Believe it or not, when I ran the City to Surf for the first time at the age of 22, I ran 57:54. I’ve probably only run faster than yesterday on about six or seven occasions, all in my 20s and early 30s. In fact, yesterday’s was my second fastest time in the past 19 years. I’m definitely happy with that.

Today’s world run photo is also from New Zealand. This was taken on the South Island between Timaru and Christchurch. The whole herd of cows saw me coming and raced up to the fence to investigate, even allowing me to pat them. I found NZ cows the least frightened and most curious of all the world’s cows. 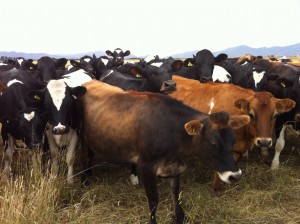