We got wet again today. We rode up into the clouds, and it was freezing when the rain started. But it only lasted a short while. The ride from Soreze to St Affrique was 115.7 km in total, with 1,791 metres of climbing. Check out the profile and other stats on

and remember to change the vertical graph to Over Distance. As you can see, the middle of the day entailed a lot of climbing, which meant a nice downhill finish over the final 30 km.

The route today – every metre of it – was part of my world run route. It was a course I know well, as I also cycled it back in 2011. Tonight we’re staying with Laurence and Stephane at Domaine du Vern in St Affrique. We lodged with them on both previous occasions we’ve been here. Laurence and Stephane have become quite good friends, having followed the world run very closely. Dave and Jo were also here in 2011, and they’re also looking forward to the wonderful dinner prepared by our fantastic hosts.

Something I forgot to mention in yesterday’s post – we rode quite a distance with an old guy who had no trouble keeping up with us, even when we were hooting along at 41 km per hour for a stretch of more than 5 km. We got to talking to him, and it turned out he was 77 years old and had competed for France in the 1960 Rome Olympic cycling road race. Does anyone else know someone 77 or older who can ride for 5 km on the flat at over 40 kph? It was pretty amazing. And he’d already covered 150 km that morning when we first encountered him.

I’ve felt quite ‘body weary’ these past two days, as a consequence of the big day in the Pyrenees. I felt really good climbing the Col du Tourmalet, even after having earlier scaled Luz Ardiden. In fact, the 1:43 it took me to climb the 18.6 km, from Luz St Saveur to the Col, meant I averaged just a tick under 11 kph for the 8% (average) gradient climb. I was really pleased with that. But the effort obviously took it out of me, although I should be fine for our ascent of Mont Ventoux on Sunday.

Here are a couple of photos from previous days (I’m getting slack about taking photos). The first is from the beginning of the big day in the mountains. We still had almost 150 km to ride at this stage, with more than 11,500 feet of climbing to come. The second is from the town of Figeac from last week. 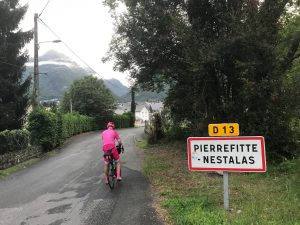 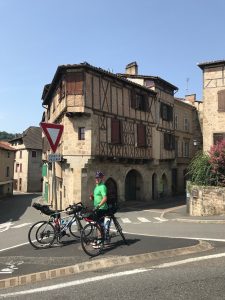