I’m still a little sore after Sunday’s race. However, the soreness is somewhat different to what I’ve endured in the past. Due to it’s extremely hilly nature, with as much downhill as uphill, I have traditionally suffered very sore thighs after the City to Surf. But that was when I was a heel striker.

The last time I completed the race was in 2010, just before I changed my style to a forefoot striker. I’ve elaborated on this before, but in short, when you land on your heels the shock is impulsive, meaning the force is absorbed over a very short period of time. When landing on your forefoot, however, the force is absorbed more gradually over the duration of the foot plant.

The impulsive force of a heel strike is almost instantaneously transferred to the thighs. However, the calves play a much bigger role in the absorption of the force of a forefoot strike. This is exactly what I’ve discovered firsthand – my thighs aren’t as sore as they used to be after the City to Surf, but my calves are sorer.

Regular readers will be very familiar with my recent focus on “running my age” in the City to Surf. What many might not realise is the regard I have for the achievement. The reason I took on the challenge was because I considered it such a difficult thing for me personally to achieve. There are a small handful of elite long distance runners who find it a fairly easy accomplishment, but not many. For most of us it is an extremely difficult pinnacle to summit, and something most will never attain.

I knew it would be very tough for me to “run my age”, which is why I have focused so intently upon it. In fact, for me personally, succeeding at this goal is something I regard as on a par with successfully running around the world. That may surprise many, but that’s how big a deal I reckon it is.

By the way, the finishing straight of the City to Surf is about 300 metres long and has traditionally taken me about 60 seconds to complete.When I turned the corner and entered the straight on Sunday I glanced at my watch and saw that I only had 56 seconds to reach the finishing line. It’s not easy to sprint as hard as you possibly can at the end of such a tough race, but I wasn’t going to die wondering. I couldn’t have run any harder down that straight and, as much as it hurt, getting there with just a second to spare made it all worth the effort. I’m pretty sure it was my fastest ever time down that finishing straight.

Now that I have managed to reach this goal (just), one of my next challenges will be to actually “beat my age” in years to come, whereby I run less minutes than my age in years. But that’s for the future. In the meantime, there will be other things to focus on – more on that in the next blog post.

Today’s photo is not from the world run. In fact, there are two images – one of me finishing the City to Surf on Sunday, and the other a screen shot of my official result. I’m the one in green at the front. The guy behind me looks like he’s about to collapse. 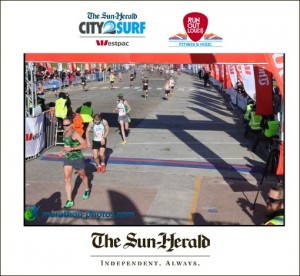 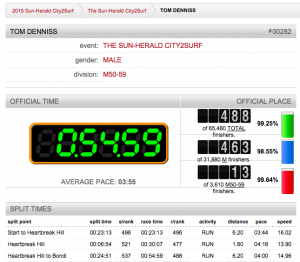 The one predictable thing about the weather in these parts is it’s unpredictability. It can be lovely and sunny one moment, and cold, wet, and windy half an hour later. That’s what happened today, but the worst of it only occurred over the final few kilometres.