The weather really warmed up as we’ve made our way into the Provence region. We started in Montagnac, had a quick stop in Mauressargues to say hello to Florence, who Carmel and I stayed with on the world run, and then headed on to Uzes. There was a massive market day happening in Uzes, with thousands of people arriving. The traffic was horrendous, but at least it was primarily coming in as we were leaving.

From there we rode to Avignon. The girls were in Avignon already, visiting various historical and tourist sites. We just walked out bikes through the old city, had lunch in the square outside the palace where the popes resided in the 1300s (after being kicked out of Rome for a century), and then headed on to our destination for the day in Bedoin. The daily total was a ‘short’ 112.7 km, with 770 metres of climbing. That brings the trip total to over 2,100 km and 25,000 metres (82,000 feet) of climbing, in just 16 days. I’m tired just thinking about it.

For those know Bedoin, it’s at the base of Mont Ventoux, one of the most famous mountains in France. Mont Ventoux is also known as the Giant of Provence. It’s a favourite climb of the Tour de France.

Tomorrow we’ll ride to the top of the mountain – a climb of around 1,600 metres (5,300 feet). In 2011 I spent a massive day on Mont Ventoux, riding to the peak from all three of the directions from which you can ascend. That entailed about 145 km and 4,400 metres (nearly 15,000 feet) of climbing for the day. I was pleased to ride each ascent in under two hours (1:56 from Malaucene, 1:57 from Bedoin, and 1:59 from Sault). Tomorrow I expect to take more than two hours from Bedoin, as I was much fitter back then, being just a few months away from starting to run around the world. Tomorrow is purely for enjoyment and will be at a relaxed pace.

Anyhow, here’s my Garmin day for today. As you’ll see from the vertical profile, we concluded the day at the high point in Bedoin. I also hit a top speed for the day of more than 70 kph, descending down a short, sharp hill into Avignon.

Once again, I was slack taking photos, so here’s a couple more from Soreze from a few days ago. 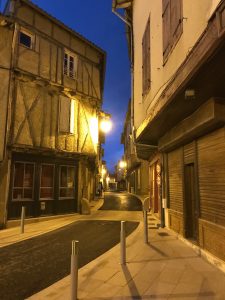 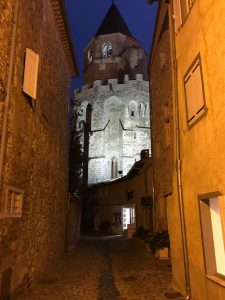