The soreness from Sunday’s race has all but disappeared now. But I won’t be doing anything too strenuous, at least not for another week or so.

Which brings me to the topic of what I do next. I always like to have something in the future to focus upon, otherwise it’s too easy to “drift”. I’ve mentioned once before that I’ve been invited to the Icarus Ultrafest in Florida in November, along with the three other guys who’ve run around the world – Jesper Olsen, Tony Mangan, and Kevin Carr. The arrangements are yet to be confirmed, but hopefully it will happen. If so, it is my intention to participate in the 12 hour race. That will mean getting back into very long distance training, which I haven’t done since prior to the Anzac Ultra back in early April.

After that I am tempted to turn my attention to something much shorter – the 400 metres, running the event at various Masters carnivals. I have concentrated on this distance in the past. In 1998 I ran 55.9 and in 2006 I ran 56.8 (my PB is 51.2, run in 1977 without any training). On both these latter occasions I ended up injured as a result of the sprint training, once with inflamed Achilles in both legs, the other with chronic hamstring strains. Yep, the 400 metres is tough on the legs.

If I do focus on this sprint distance my fundamental aim will be to run under 60 seconds in the State Championships in March. I reckon that will be a decent result for a 55 year old, the age I will be by that time. But I’m not going to get ahead of myself. When I start training for it, I may find my body is simply not up to the challenge. There’s not much sense in persisting if I suffer perpetual injuries as a result.

Today’s world run photo is another from New Zealand, fairly close to Queenstown. This was taken right at the beginning of the run when I was fresh in both body and mind. 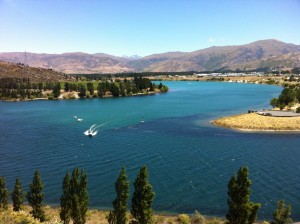 Another day of sunshine that was very regularly punctuated with freezing cold rain showers. At one stage, the rain actually consisted of tiny pieces of ice.

I was also attacked by a magpie again, though it didn’t make contact with my head. I reckon all the magpies are a bit edgy at the moment, ahead of Collingwood’s clash with Hawthorn on Friday.

Michael has re-joined the support crew, after a couple of weeks off. We just can’t keep him away. Last night we had dinner in the Glenelg Inn Hotel in Casterton, where Troy kindly provided a delicious meal and the wine. Great hospitality, once again, and a very enjoyable evening – certainly a place to visit if you’re passing through Casterton.

Troy also told me about the Lower Coleraine Road, which was a great find. It was almost devoid of cars, and had fewer hills. All the same, it was still a hilly day overall, with a long one out of Coleraine.

I was also reminded today of a little piece of trivia, which might make you think a bit – the girl who played Cindy Brady in The Brady Bunch (I think her name was Susan Olsen) turned 52 today. Where does the time go? Now that’s a wake-up call to get out there and do whatever you want to do, before it’s too late. Time creeps up on you faster than you realise.