I was feeling very heavy in the legs yesterday, so I decided to try an 800 metre time trial for something different. My tired body appreciated the shorter session and, the unusual distance provided me with further variety. Variety is the way to stay interested in your running.

This date back in both 2012 and 2013 were both a little different. In 2012 I was still having a short break for visa reasons, recommencing in Memphis on Aug 20. And, in 2013, Carmel had gotten word that her mother was not expected to live much longer, and she had to rush back to Sydney to be by her side. Unfortunately, she did eventually pass away four days later at the age of 95.

During that time, my good friend, Michael “Ironbark” O’Driscoll drove out from Melbourne and met me on the road to act as support for a week. Michael isn’t a photographer, so I don’t have many photos or videos from that time. Instead, I’ve included the symbolic image below. As you can see, my world run was drawing to a close by this date in 2013. 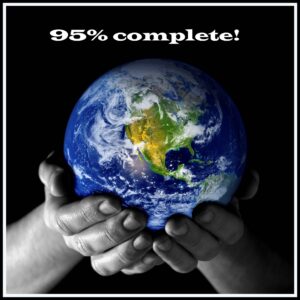