I’ve been amazed at how good my legs feel after Friday’s 114 km. Normally I have a reasonable level of soreness after runs of that distance. There has been a small amount of soreness, but it had virtually disappeared by this morning. And it’s not like I’m taking anything for it either. It’s a very pleasing development, but I’ll need to make sure it doesn’t result in me trying to do too much too soon during my recovery period. Injuries can still happen, particularly after such an event.

Some other stats from the day – I went through the first marathon on Friday in 3:39:30. And, something relevant to yesterday’s 14 km City to Surf, I passed the 14 km mark on Friday in 79 minutes. And, as it turned out, I had exactly another 100 km to run after that. I’m glad I wasn’t thinking of it in those terms. I can’t imagine the mental anguish at running the City to Surf in 79 mins and then being told I still had another 100 km to go. ]

For something different, here’s another photo from the world run. I think this was taken in Wyoming. You can see what a flat region it was and the weather was perfect. Good memories. 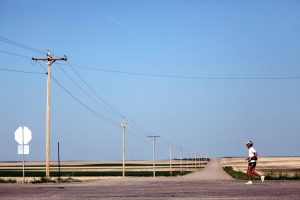 We had an interesting time last night, meeting with Julie and Paul from the Coleraine Hotel, and several of their clientele. Many thanks to the pub for the accommodation, and to their social club for a $100 donation to Oxfam (it’s in cheque form at the moment, and I have to work out a way to get it into the system).

I discovered an intriguing fact about Coleraine. Helena Rubinstein initiated her cosmetics business from the town. She had come here in 1897, after her father had tried to arrange a marriage for her in Poland. She had escaped on the pretext of visiting her uncle in Coleraine. Once she’d set up the business, she expanded it by moving to Melbourne, then eventually to New York, where it become the biggest cosmetics brand in the world for quite some time. And it all started in a small town in western Victoria, with a current population of about 800.

Today’s run was in better weather conditions – mainly sunshine, but with a cold westerly tailwind (better than a headwind). I reached Hamilton around noon, and did an interview with Tessa and Judy from the local newspaper, The Hamilton Spectator.

The afternoon was a bit tough. It’s always hard when I have more than 30 km to run after lunch. I finally made it to Penshurst to finish my day. Feeling a bit tired tonight, though.