I spent the weekend down south at Bulli, enjoying a couple of runs in less familiar environs than my usual local running roads. There is a great running/cycling path from Wollongong all the way up past Thirroul, and I ran this path on both the world run in 2013 and the Melbourne to Sydney run in 2009. It was good to be back on it again, along with a multitude of other runners, walkers, and cyclists. I even ran into the indefatigable Chips from the Tour de Bois. He was riding on the path. Seeing him wasn’t entirely unexpected, though, given he lives just a a couple of kilometres away in Thirroul.

And it was a surprise to see my book featured in the Traveller lift-out section of various major Australian newspapers over the weekend, including the Sydney Morning Herald and Melbourne Age. I hadn’t realised the article would be appearing. Thankfully, several friends let me know about it.

I’m getting back to normal now after the City to Surf. All the soreness is gone now, but I haven’t quite got the spring back in my stop just yet. I’m in two minds as to whether I should concentrate initially on moving up in distance ahead of the expected 12 hour race in Florida in November, or testing myself with pure speed over much shorter distances, ahead of my expected focus on the 400 metres over summer. The two are at such extreme opposite ends of the running spectrum, and this poses a problem. It’s something I’m just going to have to resolve myself – there’s no simple answer to this type of conundrum.

The world run photo for the day is of one of the many streams I passed over on the South Island of New Zealand. It was a very peaceful and relaxing landscape. 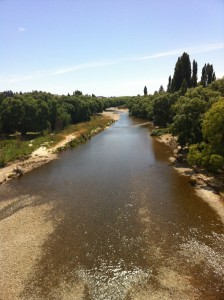