A shorter day today, with just 75.5 km under the belt, although it did involve a fair bit of uphill. We rode from Quiliano (near Savona) to Calamandrana, a small Italian village Carmel and I had visited with Jo and Dave in 2007 and 2011.

In 2011 we had lunch at a very interesting little restaurant – no menu; you simply let the waitress bring out the possibilities and you decide whether you like the look of it. Today the options featured truffles very heavily. Real truffles, that is. The sort that pigs sniff. We had a fantastic time, with the ristorante owners coming out and having a drink with us. They even brought out bottles of wine that were nearly 40 years old – and superb. Apparently, it’s a novelty to have Australians in town.

Anyhow our efforts today take the total to nearly 2,450 km, and almost 30,000 metres of climbing. Here are today’s stats.

And here are some photos from recent days. The first is of an estate near Monte Carlo. There was an armed guard on the gate as we rode past. Then we saw the place. Beside the mansion, there is the amazing infinity pool, immaculate grounds, top class tennis court, and even a full human size outdoor chess board.

The second photo is one I took when I went for a run from Menton into Italy. The border was only 3 km away, so it was no big deal. However it did represent the first time I’d crossed a national border on foot since May 2013, when I ran over the Bulgarian-Turkish border with Barry during my run around the world. How quickly that time has passed. 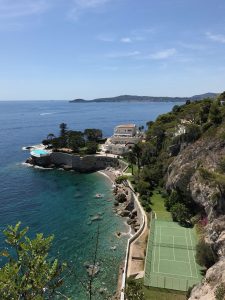 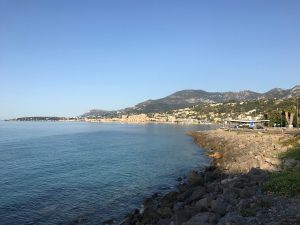