Below is a graph of my City to Surf times over the past 32 years. I looked back through all my log books and found that I’ve now run the race 18 times. The most recent occasion is the one on the far right of the graph. As it turns out, my time last week was faster than on ten of the previous occasions and slower than just seven of them (and one of those was only slower by 7 seconds). And most of those faster times were run in the 80s. In fact, over the past 25 years I’ve only run the City to Surf faster than last week on three occasions. As you can see from the graph, there is no discernible trend that would indicate a slowing down with age. Hopefully that phenomenon will continue for a while. 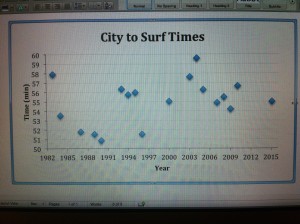 Early in the morning, I passed the 25,000 km mark for the world run. It was tough running, with the wind nearly blowing me over at times. The top temperature for the day was 8 C, but the wind chill factor made it feel like it was below freezing.

My sister, Linda, organized a fund raising afternoon for Oxfam on Saturday, and raised nearly $1,000. Many thanks to Linda, to all those who helped with the event, to the Unanderra Hotel, and to all the local Unanderra businesses who donated prizes for the raffle.