I’ve had the third treatment on my heel and it seems to be showing an improvement. I won’t say too much just yet, as it will be a few weeks before the effectiveness of the treatment becomes more obvious.

World run memories from Victoria today, as I approached Melbourne. In fact, I’d reached Ballarat on this day in 2013.

And it’s less than two weeks till Lootie reaches Sydney. I will be there to greet her. More on that to come too.

It has been a very busy 24 hours. Last night, after arriving in Penshurst, we headed to the local football club, where they were having their weekly schnitzel night. Besides having dinner, I gave a talk about the run, and the locals kindly donated $265 to Oxfam.

I headed off towards Mortlake this morning, and soon after starting, I was joined by Clare, a local dairy farmer. She is also an avid trail runner. A little while later, her nephew and niece, Dougal and Olivia, joined us too. At the age of 9 and 7, respectively, they did very well to run 9 km with us. Their mother, Georgina, and grandparents, Bill and Trina, drove ahead and behind, so we had quite a contingent at the time.

Clare continued on with me after Caramut, till she reached her farm. She totalled 28 km with me. It was great to have her along for the day, despite the fact she is running another 50 km tomorrow with a friend of hers who is running around Port Phillip Bay. Thanks also to Bill and Trina for their donation to Oxfam.

About 5 km later, I received a call from my cousin, Karen. She and husband, Michael, are travelling in Victoria at the moment, and were just 15 km down the road. They drove out, and Karen ran the rest of the way into Mortlake with me. It was easy stuff for her, having previously been a medallist in the NSW marathon championships.

Karen and Michael are staying the night with us in Mortlake, so we should have a great evening. Michael is keen to see the Collingwood game, and I’d like to catch the Rabbitohs game. Hopefully the pub telecasts them both.

Early in the morning, I passed the 25,000 km mark for the world run. It was tough running, with the wind nearly blowing me over at times. The top temperature for the day was 8C, but the wind chill factor made it feel like it was below freezing.

My sister, Linda, organised a fund raising afternoon for Oxfam on Saturday, and raised nearly $1,000. Many thanks to Linda, to all those who helped with the event, to the Unanderra Hotel, and to all the local Unanderra businesses who donated prizes for the raffle. 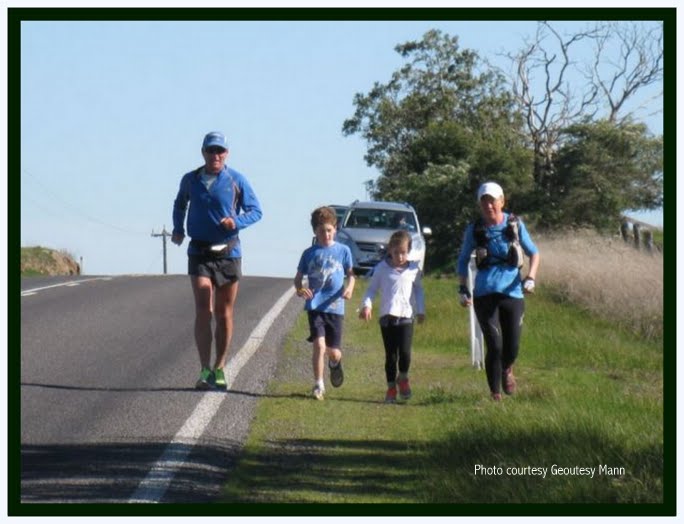