Today is the third anniversary of the occasion when I unwittingly stumbled upon Sun Studio in Memphis during my run around the world. I was simply running along a main road in the city when I noticed an historic plaque outside a small building. When I stopped to read it, I soon learned this was where Elvis recorded his first ever song. You can read more about the event in the On This Day section below.

I’m still in a bit of a “no man’s land” at the moment regarding my training. I haven’t quite decided how to proceed from here. I’m leaning toward doing one long run each week, preparing for the expected ultra event in Florida in November, and one very fast flat out sprint each week, probably around 400 metres in distance, to test my propensity for that same distance ahead of the athletics season over summer (I would also do easier shorter runs on the other days). Normally I’d do more than a single sprint in a week, in fact, several in a session, but I’m going to be extremely careful in the early days of this campaign. My experience with sprinting on the track in spikes in recent decades has taught me that it’s a very easy way to get injured. A much more careful and slow adaptation period is called for on this occasion.

Today’s photo from the world run is another from New Zealand. I’m pretty sure this was taken not too far north of Dunedin on the South Island. It was still early days and I was feeling very fresh. 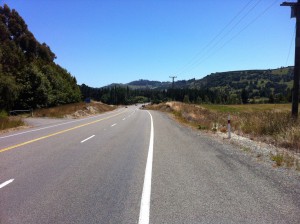 Another shorter day as I ease back into it – tomorrow I will get back to full length days.

But before I write about today’s run, let’s revisit last night. As mentioned yesterday, a local running group in Memphis, the Breakaway Runners, kindly provided the accommodation for last night, and we met with many of them in a local bar after their Monday night run. Matt, Barry, Brian, Becky, Jessica, Michael, Miles, and many others were great company as we talked about running and all manner of other topics. After dinner we headed down to Beale Street, the heart of the live music scene in Memphis – definitely worth checking out if you’re here.

The running group is a based around Breakaway Running, a Memphis running shop owned by Barry. I popped into the shop this morning on my way out of town. If you’re a runner and passing through Memphis, you must drop in, say hello, and pick up any running products you might need. It’s a top notch establishment, with much more knowledge on the floor than the chain athletic shoe shops. Thanks Barry and Matt, for the great company, accommodation, and running tops.

On my way out of Memphis, I accidentally stumbled upon one of the great iconic music locations – Sun Studio. This is where Elvis Presley recorded his very first song in 1954. It’s a small understated building that has since been the location for recordings by many of the world’s greatest bands and artists.

Later I ran across the border from Tennessee into Mississippi, my 16th US state of the trip. That means I have run in three states in the past 24 hours. It was also one of those days when I crossed both a meridian and a parallel (35N and 90W). While I am a bit sore, it’s actually not as bad as last time – I’m feeling pretty good.

A bit shorter today, as I needed to finish early to get to a function tonight in Melbourne, which has been arranged by my generous sponsor, Next Digital.

It was a much nicer day – the best weather in more than a week. The landscape was very diverse too – from quiet dirt roads in a national park, to busy suburbia on the outskirts of Melbourne.

It was also a very busy day, with lots of phone calls from the media, including some radio interviews on the road. I expect this to increase tomorrow, when I run through the city.

After his run yesterday, Jeff has moved into second place on the aggregate of distance run with me, with 118 km. There will be much activity in this regard in the next couple of weeks, with Dave and The Hud expected to have a crack at Eric’s record of 56 km, for the furthest run in a single day. The big question is: will one of these guys be able to pass Chook’s aggregate record of 272 km?