As I’ve said before, I now find myself in a strange position, training for both the 400 metres and a 12 hour race at the same time. This is highly unusual. It will be interesting to see if I can pull it off.

This morning I did a moderately long run – just 24 km, but at a decent pace, and feeling good. I’ll need to up this long run in the coming months ahead of the November 12 hour race. In between, I’ll be concentrating on faster sprints than I’ve done for ten years. Mmmmm, a dangerous combination, but exciting at the same time.

Last mention of the City to Surf for a while – some readers may be familiar with such terms as “regression analysis”, “least squares minimisation”, and “line of best fit”. Out of interest, I applied this sort of analysis to my historical City to Surf times; those shown in the graph I posted last week. The result is a trend line which best approximates the progression of my times. You’d normally expect one’s race times to be getting slower in the period between one’s mid 30s to mid 50s. Surprisingly, over the past 20 years my trend line indicates an average improvement in City to Surf times of about six seconds per year. I’m certainly happy with that.

Today’s photo from the world run is of a street of old houses in Dunedin, NZ. I liked the architecture and the fact the houses had been restored so well. By the way, this street got very steep just down toe road, like so many in Dunedin. 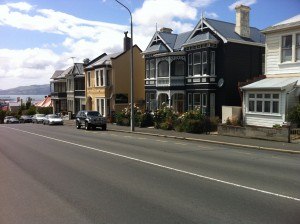 It was a long day. The roads here in Mississippi are picturesque, but probably the most pedestrian-unfriendly I have encountered anywhere. There is zero shoulder on just about every road. I am constantly meandering back and forth across the road, depending on which direction the latest car is coming from. When there is traffic on both sides, I need to jump into the long grass beside the road.

Another dog decided to follow me today. After it tagged along for some distance up the road, we decided it needed to be taken back, so we packed it into the car and Carmel drove it back to its home (sorry again, Chook). As nice as it is to have friendly dogs for company, I don’t want to be responsible for it being hit by a car or getting lost.

I’ve been through some interesting places the past few days. Holly Springs is where a Civil War “event” occurred, although it was relatively bloodless, when the Confederate Army took back a town and planted its flag in the square. We had lunch at a cafe in this town square. I also passed close to Tupelo today, which is where Elvis was born and lived as a child. It is also the inspiration for Van Morrison’s song Tupelo Honey (one of Mr Reefton Humblewood’s favourite songs, along with Cottonfields and Kumbaya).

One thing I’ve noticed that’s different in Mississippi are the flags. Everyone knows that Americans love to wave the flag, but I have seen more Confederate flags in the past two days (5) than US national flags (3). Mmmmm, interesting!

It’s hard to believe, but it took just 23 days of running to get from a state bordering Canada (Wisconsin) to a state bordering the Gulf of Mexico (Mississippi). I’m certainly happy with that sort of progress.

I have a couple of milestones coming up tomorrow, so stay tuned.