I’m being very careful with my plans to train for a 12 hour race while increasing my speed over 400 metres. After a good long run on Monday, I had planned to do a short and sharp speed trial this morning. Instead, when I set out I was feeling a little stiff and a touch sore, so I immediately decided to simply do a shorter and easier jog. I will now aim to do that intended speed session tomorrow.

Given my past experience with the 400 metres, I know how important it is for me to go easy in the initial training. That’s even more important when I’m concurrently training for such a long event as a 12 hour race, where I’ll be running well over 100 km in one go.

You may be wondering why all the world run photos I post are of the early days in NZ and the US between California and Minnesota. The reason is, after my phone got wet in the floods of Duluth in June 2012, I had to get a new phone. But I have no idea where the photos from the new phone have ended up. I can’t find them. Carmel has thousands, but those can all be seen in the Photos section of the web site. The photos I’ve been posting were all taken by me. I’ll have to eventually post Carmel’s photos when I run out of my own. Anyhow, today’s world run photo is from Kaikoura in NZ, a must-see place for any tourist to the area. 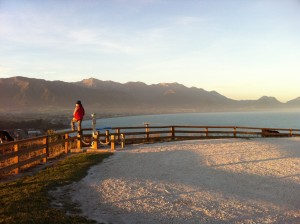