I covered 110 km in total last week – a good amount for the second week after a 12 hour run. I still have a slight niggle at the bottom of my right Achilles, precisely where it attaches to the heel. However, it hasn’t progressed at all, so I’m managing it adequately. Perhaps a little more rest would help. I’m back in Tasmania this week, so I need to consciously go easier on the hills.

I recently posted some information about the importance of sleep for athletes. This was based on research conducted by a company called Casper, which has developed some high tech products in this regard. I believe Time magazine rated Casper’s mattress technology one of the 25 best inventions of 2015. I haven’t tried the products myself, so I’m not endorsing anything, but if you’re interested in the latest in this interesting area of research and development of products to help athletes (and non-athletes alike) sleep better, have a look at www.casper.com.

The latest in this series of ‘old favourite’ photographs is this one of “elephant’s feet”. I stumbled upon this geological wonder on the road between the Grand Canyon and Monument Valley in March 2012. They were enormous. I would have only stood as high as the bit of red rock you can see at the base of the ‘feet’. Funnily enough, my fellow world runner, Tony Mangan, passed this same point about a year earlier and recalls these same rocks. 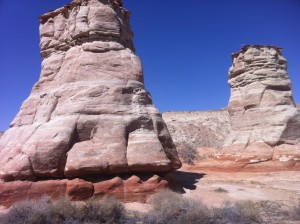