I’ve just completed my final 3 km time trial ahead of the City to Surf on Sunday. Once again, I was feeling sluggish and knew I wouldn’t set any records. This was particularly confirmed a few hundred metres into the trial – I just didn’t have it. That said, I did manage to run it in 10:15 (3:26, 3:28, 3:21), which was seven seconds slower than a month ago.

So, it seems I’ve gotten slower since the Sutherland to Surf; at least that’s the case with both the 3 km and Centennial Park runs. The same thing happened last year. However, I suspect it’s the residual fatigue caused by that race which is the real culprit. And, to add to it, I’ve run 215 km in the 14 days since the Sutherland to Surf. That’s why I was suggesting in the last blog post that I am suffering from a bout of overtraining.

So, the rest starts now. I have six days until the City to Surf and I will be taking it very easily during that time. That should be enough time to freshen up – and ‘fresh’ is a feeling that’s somewhat foreign to me these days.

I thought I’d post a photo today of the Mile High Stadium in Denver Colorado. This is the home ground of the Denver Broncos. When I ran past it in late April of 2012 it was deserted. That’s not the case on game day during the gridiron season. 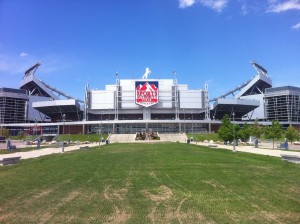 PS As has happened before, the Garmin had trouble picking up the satellites when I was amongst the tall buildings in the city. I noticed it was not updating at all for a period. I had to remeasure part of the course, and have added the missing 1.42 km to the official data.