For ten years now I’ve been running as a forefoot striker, wearing very light and flexible minimalist shoes. Recently I decided to try a different shoe brand – a fairly new one that I hadn’t heard of until recent times – Hoka Rehi. I’ve now been wearing them for about a month and I really like them. In fact, they’re as good as any running shoe I’ve ever worn. I’m mentioning this completely independently. I have no affiliation whatsoever with Hoka, nor have I had any contact. I just thought it was worth mentioning my experience.

Today’s video is from an appearance I made on the Channel 9 Today Show in August 2012. We had headed back to Australia for a week for visa renewal reasons, before returning to Memphis to recommence the run around the world. There’s also a photo from that day with the interviewer, Cameron Williams.

I had great delight in letting Cameron know that there are two towns that I’d passed through on either side of the Grand Canyon – one called Cameron, the other called Williams. It was a good interview, although one thing Cameron got wrong was about walking. I actually walked very little throughout the entire run – overall it was about 98% running and 2% walking.

The other photos are from a year later, as I made my way south of Bordertown in South Australia, on my way to Mount Gambier. It felt like I was approaching the home straight at that time, with only about a month to go. 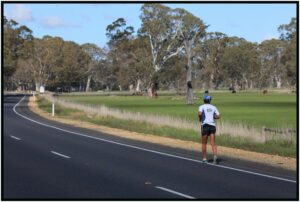 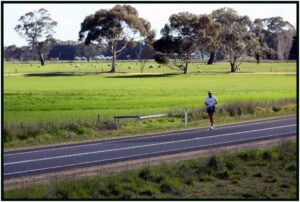