After several hassle-free days of running without any calf issues, this morning my left calf decided to give me a few twinges again. The strange thing is, it was my shortest and easiest run of the week, so it’s hard to figure why it objects when it does.

I have an hypothesis I’ve developed over the years from past calf strains. I could be entirely wrong about this, but it’s a possibility. All muscles have a sheath around them. This is a whitish lining of the muscle. It’s possible I’ve suffered a small split in the sheath. As it heals in one place, the split opens up further along the sheath. Eventually the split reaches a natural end point and everything is OK.

As I say, I could be way off the mark with this theory, but it’s at least consistent with my symptoms, whereby the niggles and sharp twinges seem to migrate along the outside of the muscle over a period of a few weeks.

The photo below is another from the vault. It’s an amazing cloud I encountered over the Painted Desert, on my way from the Grand Canyon to the old Navajo trading post town of Cameron in late March 2012. It was like a giant pillow. 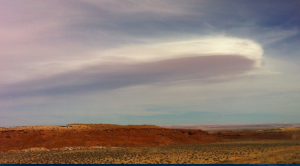