The question I’m being asked most at the moment is “What’s next?”

I’ve previously expressed an interest in trying my hand at a few 400 metre races on the track this summer. As much as that interests me, I fear it may result in a lot of muscle strains and tears getting there. That one’s a work in progress.

Another race that interests me a lot is quite unique. There is a 250 km race in the Simpson Desert in late June called the Big Red Run. It’s held over six days as a stage race. That means there are six different races within the one overall race, with one’s accumulated time each day comprising their overall time and result, similar to the Tour de France.

The first three days are roughly a marathon distance each (42 km), followed by a 30 km day, then a big 84 km stage, culminating in a short 8 km race to the finish on the sixth day. The race starts and finishes at the iconic Australian outback town of Birdsville. Sounds like a fantastic race to me. However, the almost $3,000 entry fee is a bit of a stumbling block, especially when the cost of getting there is also factored in. I can’t see how I can justify spending that sort of money on a race – but maybe at some time in the future.

Today’s photo is another from my pre  world run cycling training ride through Europe in late 2011. This one was taken a the top of the Col d’Aubisque in the Pyrenees. It was the first of the major climbs that Dave and I did that year. 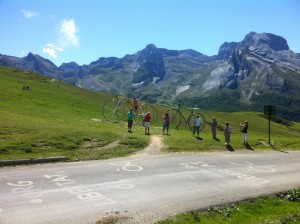 Many parts of the road today were lined with eucalypt trees. I assume they have been introduced from Australia. The smell of the gum leaves in early summer, coupled with the landscape of wheat fields, had me thinking I was in central NSW on my way to the Gooloogong Hotel.