The past two days I’ve been on King Island for work. But it’s also where I’ll be doing a 32 km race in March. I checked out some of the course this morning. It should be a great event, with the race course going from the eastern side of the island to the western side.

With the all the recent travel I’ve been doing, my running has taken a bit of a back seat. This isn’t such a bad thing as the year winds down. I’ve also had a chest infection, so I haven’t felt like running very far. It also means I’m resting up, both physically and mentally, ahead of launching into a hectic New Year of running.

This photo gives you a sense of what it was like at times running on the main highway across South America. While I’d have preferred not to have the trucks passing me, I must say that the drivers were always courteous to me and I never really felt in danger. Car drivers were much worse than the truckies. 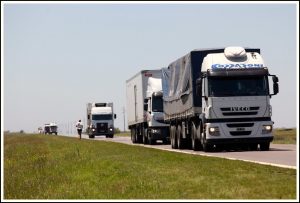