If anything, my calf is getting worse. It’s hard to say with certainty, as the problem constantly moves. It may just be that the issue is passing through a particularly painful point in my calf at the moment. Anyhow, I’ll be reducing my mileage to an absolute minimum for the rest of the year, hoping to be fit for the New Year.

It’s frustrating, but there is a trend here. The past four years, including during the short break at Christmas in 2012 during my world run, I have had, or have developed, problems with the lower left leg and foot during December. I have a theory as to why this may be occurring, and it has to do with how I sleep when the weather gets hot. I want to test this theory a little more before elaborating on it.

The photo below is from my recent time in Florida. This is post race, during an interview I did with race director Andrei Nana. The other world runners were also interviewed at the same location as part of a documentary that will be produced about running around the world. I’ll let you know when that is available to view. 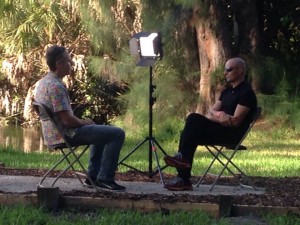