It’s often said that you don’t appreciate what you’ve got until it’s gone, and this old adage is more often than not applied to one’s health. And it’s very true of running health. When, due to an injury, you can’t run unimpeded and without pain, it can feel like you’ll never be able to do so again. But you will almost always recover, so it’s important to be patient and realise this. One of the great joys is when you do get back to pain free running. You then really do appreciate what a great feeling that is. I’m hoping to have that ‘joyous feeling’ again very soon.

This photo from the world run was taken north of the town of Oamaru in New Zealand, not far from where Tony Mangan is currently walking on his world walk. Oamaru is a gem of a town, with some classic original architecture from the mid 1800s, which is still in almost pristine condition. There’s also a fantastic seafood restaurant out to the south of the harbour. The town also boasts an amazing B&B called Pen-y-Bryn, run by the two James’s from New York City. 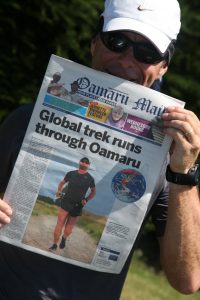