I’m still going to take it easy for the next couple of days, but my recent strategy certainly seems to have paid off. My left calf appears to be perfect again – not the slightest hint of a twinge when I ran today. I’m sure I could go a lot further, but the plan has worked so far, so I’ll see it through. I should be rapidly upping my running come Friday and the New Year.

I know a lot of people consider me to be a bit of an expert on running, but there’s plenty I still have to learn, especially when it comes to racing over really long distances. After the effort required to win the Icarus 12 hour race in 30 C heat and 96% humidity, I really should have had a prolonged rest.

But it’s easy to begin thinking you’re invincible when, a week later, you feel fine and ready to plough into it again. So that’s what I did. Bad idea. Because, although my head wasn’t smart enough to insist on a more extended rest, my body wasn’t going to let me get away with anything less than a decent time off.

The result – the minor calf injury. And, as if that wasn’t enough to tell me to ease up, I continued to try to push through it. Only now, after some well planned rest, I’m finding that both the calf and my over energy levels are feeling back to normal.

They say to rest for a day per racing mile. In my recent case, that means resting for 67 days. That’s probably a bit over the top, but it’s now been close to 40 days since the Icarus race, and that feels like about the right amount of rest. As I’ve said several times before, patience is not one of my virtues. I’m patient with others, but not with myself. It’s one of the those things I still need to learn.

Now we can all learn from the photo below. Carmel took this as I was about to set off on my day of running from Mendoza, the wine capital of Argentina, during the world run. The day before I’d just emerged from the Andes on to the plains of Mendoza. This old guy only had one leg, but it didn’t stop him from cycling. There was a minor adaptation to his bike, but it enabled him to stay active, whether by choice or necessity. Where there’s a will, there’a way. 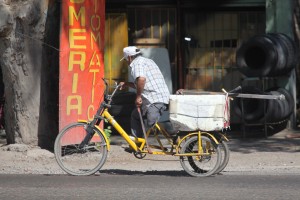