My calf is now close to perfect. I’m able to run good distances without even the slightest twinge, with both legs feeling equally strong and balanced. One can never be sure another injury isn’t just around the corner, but at least now I feel this one has healed. I’m ready to launch into the new running year with a bang.

As is common on New Year’s Eve, it’s an appropriate time to look back at the year that was. As this is a running blog, I’ll keep the topic to “my running year that was”. If you’ve been following throughout the year, you’ll already be aware of the content in the summary below.

I began the year still suffering the remnants of the Achilles injury I’d sustained back in August 2014. Each time I thought it was over, I’d suffer a relapse. However, by March it felt completely healed and I was looking forward to the Anzac Ultra in Canberra in early April – a 150 km trail event.

Unfortunately, the uneven nature of the trails resulted in the Achilles flaring up again at the 65 km mark, and my ultimate retirement from the race at the 75 km halfway point. I reckon I’d have been fine if the race had been on a flat road course, but that’s not what trail races are about.

After a few weeks of easy flat running the Achilles was again feeling good, and I’ve not had a problem with it since. This led to a very successful second half of the running year.

One of my long held aims was to run the City to Surf, a very hilly 14 km race, in the same number of minutes as my age in years – referred to as “running your age”. Few people manage this feat, and I never had to that point. So I was ecstatic when I stopped the clock at 54:59. I had only just made it, but it was good enough. In the months prior to this achievement I also managed some good results in training. For example, I ran 10:08 for 3 km, my fastest at that distance for several years, as well as a 17:43 for 5km.

This was a great launching pad for my next adventure – the 12-hour Icarus ultra race in Fort Lauderdale, Florida. I enjoyed an uninterrupted and quality training program between late August and mid November (interspersed with a week of cycling on the annual Tour de Bois ride), and was ready for my first 12-hour race. The conditions were oppressive, with 30 C temperatures and 96% humidity.

And to complement my successful City to Surf foray, I actually won the Icarus race, covering 108 km – my first-ever official running race win (other than track races and informal running club races). And it was an international ultra marathon at that!!! I never would have contemplated that as a possibility, even just a few years ago.

And then, of course, I incurred a slight calf injury in the aftermath of that race, primarily because I didn’t rest enough. But that issue seems to have now resolved itself.

So, all in all, it has been a highly successful year of running from my perspective. I’m not quite sure where my priorities will be focused in the year ahead, although I’m working on some interesting possibilities. I’ll be sure to let readers know if and when these materialise. There are some exciting possibilities emerging with other runners too – those from the world running fraternity. More on that at the appropriate time.

So, happy New Year to everyone, whether you’re a runner or not. Try to make it a positive and enjoyable one.

I just couldn’t help posting the photo below. Not that it has anything to do with New Year’s Eve – just that it’s memorable. This is me running along the southern rim of the Grand Canyon during my run around the world. You just can’t find a more spectacular location to run. I reckon it’s a suitable photo with which to end the year. 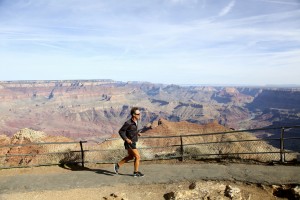