I’d like to mention a great recent initiative in running called the Run Down Under. It’s a virtual race around Australia on a defined course. Participants log their results online each time they run, with the distance added to their cumulative total around the country. This shows up on a map and you can see where you are in your race around Australia relative to other runners.

If you want an incentive to get out on the road each day and run further than you might have, and with a more interesting perspective to look forward to at the end of each run, then I strongly recommend you sign up for the Run Down Under on www.rundownunder.com.au. The next version of the race starts on January 1, so make sure you sign up this month. You don’t have to live in Australia to be part of the race.

I noted on the news this morning that the perpetrators of the most recent mass shooting in California lived in the town of Redlands, about 100 km east of Los Angeles. This was a town I ran through on my run around the world. In fact, we stayed a night in a motel in Redlands and ate at a nice Thai restaurant there. I guess it’s true of every place where atrocities occur – it just seemed like such a normal and peaceful town with people going about their daily lives. You just never know what lurks within.

Today’s photo is from the top of Mont Ventoux in Provence, France. This was taken after one of my three ascents to the top of the huge mountain on Sept 15, 2011. I rode each of the three different ascents on the one day, which is one of the iconic achievements for a cyclist – 15,000 feet of climbing in the one day. It was fantastic training for my upcoming world run, which began just a few months later. 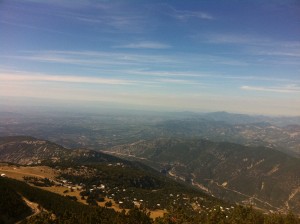