I now have a strong suspicion that my hip problem is not actually an injury at all, but a problem stemming from weak core muscles – the muscles that work constantly to keep you stable and upright. I had a similar issue in 2010/11 and it took ages for it to be correctly diagnosed.

This time it appears the core muscles on my right side are not doing their job, and so the larger muscles are trying kick in and are getting very fatigued (they’re meant to do higher intensity but shorter duration work). This fatigue causes a bit of inflammation due to overwork, particularly where the tendon attaches to the bone.

That’s why it’s a bit sore to touch, but most of the pain comes from the ache you get when a muscle is stressed for too long, like when you do a hundred sit ups or bicep curls and your muscles are screaming out for you to stop.

I’ve started on some core strengthening exercises. I should know if the diagnosis is correct within a week, and perhaps even within a few days.

This photo was taken in Argentina, a few days before I finished my South American leg. That means it was just over four years ago. I’d fallen on the road and took quite a bit of skin out of my palm. It doesn’t look much, but it was deeper than it appears. It was certainly the worst fall I had of many during my world run. This one took a few weeks to heal. Falls are unfortunately inevitable when you’re running around the world. 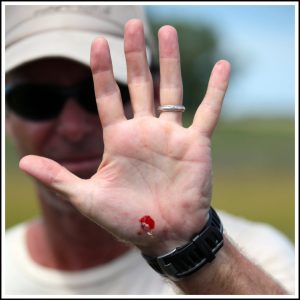