I have recently been writing a series of articles for Azumio, the fitness and wellbeing app you can get on your smart phones. There are actually several apps, such as a heart rate monitor and one that measures the steps you take, to mention just two. You can read my latest article on

I was due to conclude my series of eight articles soon, but have been asked by Azumio to write a further eight articles after that. Once that’s done we’ll decide whether to continue further. It’s good to know Azumio appreciates the my writing.

Here’s another photo from the Icarus 12 hour race, taken by Tony Mangan. I’m looking a bit more tired by this stage, with a bloated belly from all the drinks I was having. 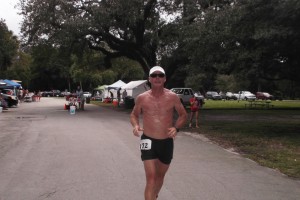