I’ve had a couple of very good days on the calf. While not getting over confident, I am very pleased with how it’s going. I think I’ll be back to my best within a few weeks.

If you’d like to follow Serge Girard’s Garmin data in detail, you can do so by clicking on the Follow here the details of Serge’s journey link at the bottom of the map on his Home Page on www.sergegirard.fr.

Here’s a photo of the motel we stayed in at Monument Valley, right underneath an outcrop and camouflaged into the landscape. The view from the balcony was amazing. 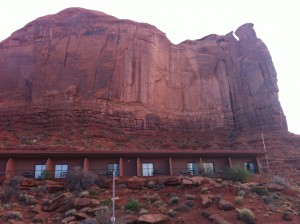 I must admit, the new pair felt great, and I had no problems at all, despite not wearing them in. They are actually an old pair from about two years ago. I didn’t much like them at the time, so didn’t wear them. They feel good now, however.