Today’s video is from my entry into the Spanish city of Burgos. I had been there four years earlier and was impressed then. I was no less impressed on this occasion. The photos from this period are worth a look too.

A shorter 44 km today on the run into the city of Burgos. We were here in 2009 with Libby, and have decided to stay in the same hotel, just a short walk from the cathedral. This cathedral is one of the most impressive in all of Europe, and is almost Gaudi-esque, well before Gaudi ever existed. Have a look at the photos of the structure.

I chose well in terms of the roads today. Except for the last few kilometres, the whole day was spent barely seeing a car, and the road surface was level and smooth – perfect for running. And the hills were manageable too, unlike some of those yesterday on the freeway service roads, which had short sections so steep that I had to walk with my hands on my knees.

On to another topic – I was going to run in Morocco, but have decided against it. It was only going to be a very short section, and I wasn’t going to count it in my total. However, I have decided it doesn’t make sense to break the contiguous nature of the run across Europe from “ocean to ocean”. Additionally, it has been suggested to me several times that running in remote areas of North Africa at the moment would be foolish. The cities of Morocco would be fine, I’m sure, but spending days in the wilderness, between the cities, might be inviting danger, especially given the recent unrest. The decision doesn’t affect the validity of my run at all, other than that I will now only be able to claim having run on five continents, rather than six.

We’ll be off to experience a Friday night in Burgos tonight. I’m a little weary, so I might make use of my earlier than normal arrival to have a short nap in preparation.

I must admit, the new pair felt great, and I had not problems at all, despite not wearing them in. They are actually an old pair from about two years ago. I didn’t much like them at the time, so didn’t wear them. They feel good now, however.

A cold and grey day didn’t prevent me from knocking over 54 km. There’s something about an icy wind in your face that saps your enthusiasm, but it’s important to push through it. Otherwise I’d be making excuses all the time. The atmospheric conditions were not conducive to photos either, so Carmel didn’t bother with many. She’d rather take none than take substandard photos.

Early in the morning I crossed the equivalent of a state line, entering the region of La Rioja. To any wine-loving world runner worth his salt, the Rioja region is compulsory. Some of the world’s best reds come from around these parts.

Late in the morning, I rolled my left ankle when I inadvertently stepped on a rock. It felt really bad at the time – don’t they always – but recovered fairly quickly, to the point where I couldn’t even feel it this afternoon.

After farming and vineyards in the morning, the afternoon landscape became a bit more light-industrial at times. This, coupled with the wind in my face, made it somewhat of a slog. Still, I got through a big day, and I’m now relaxing in our bungalow accommodation in a local camping ground. I think I’ll sleep well tonight. 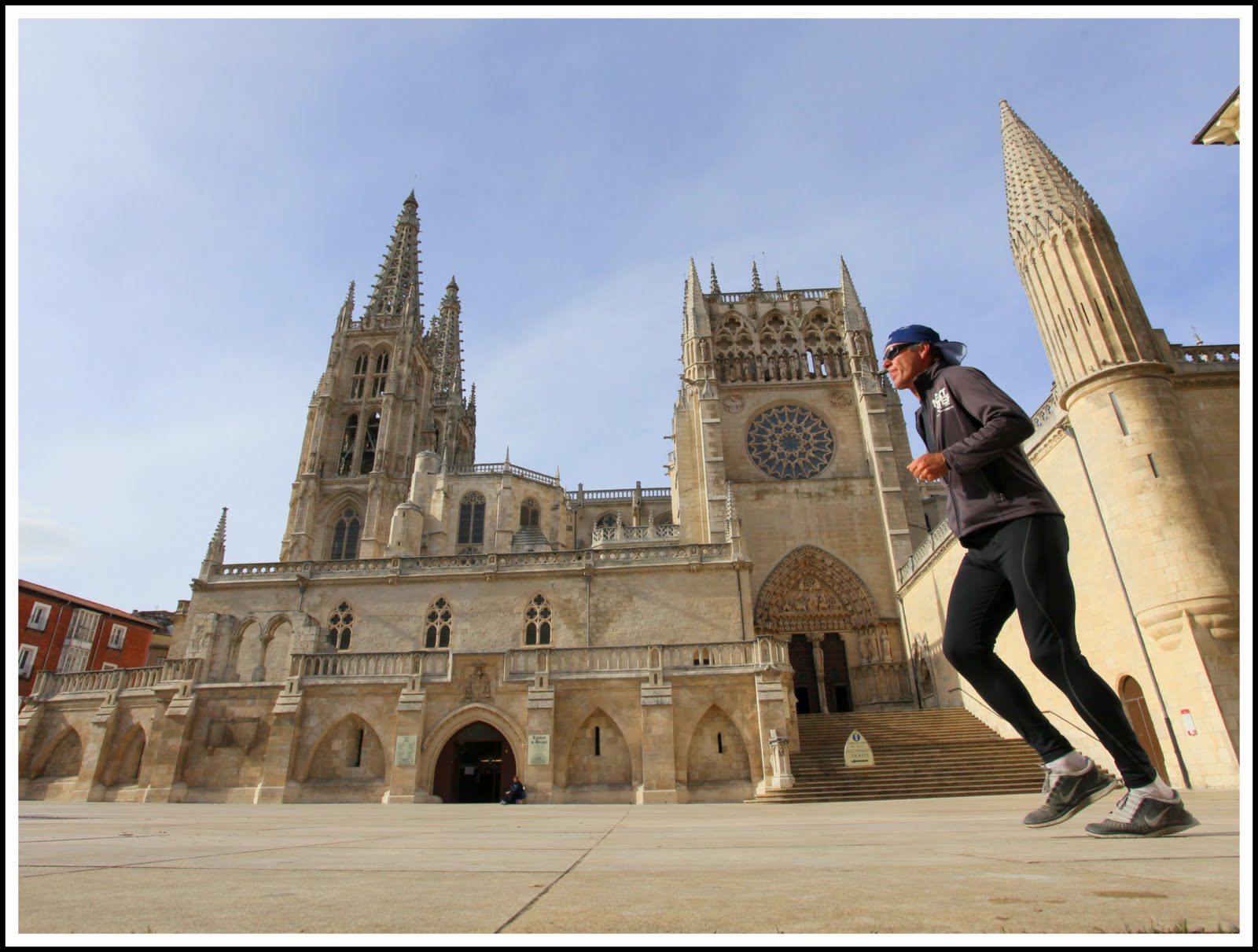 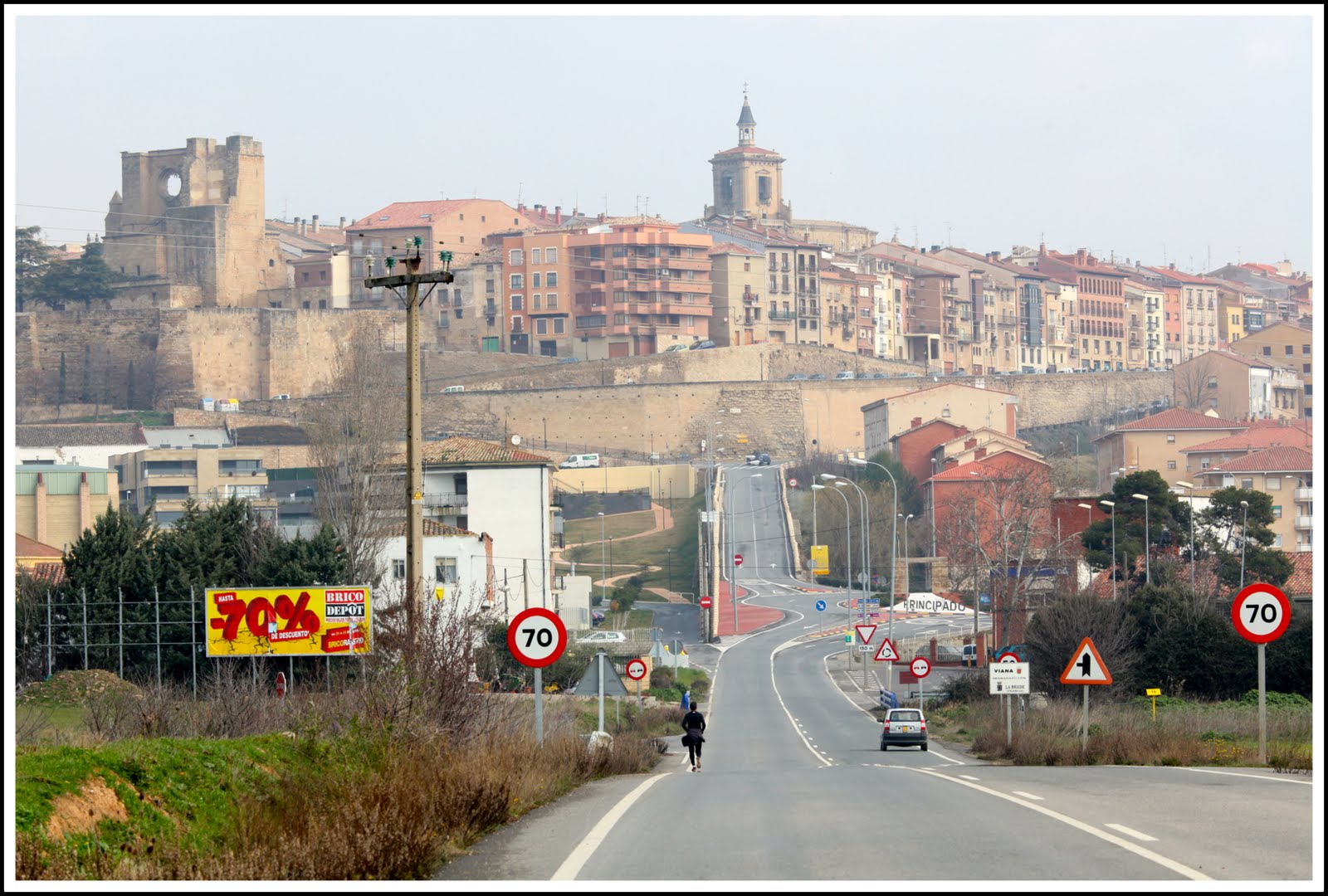 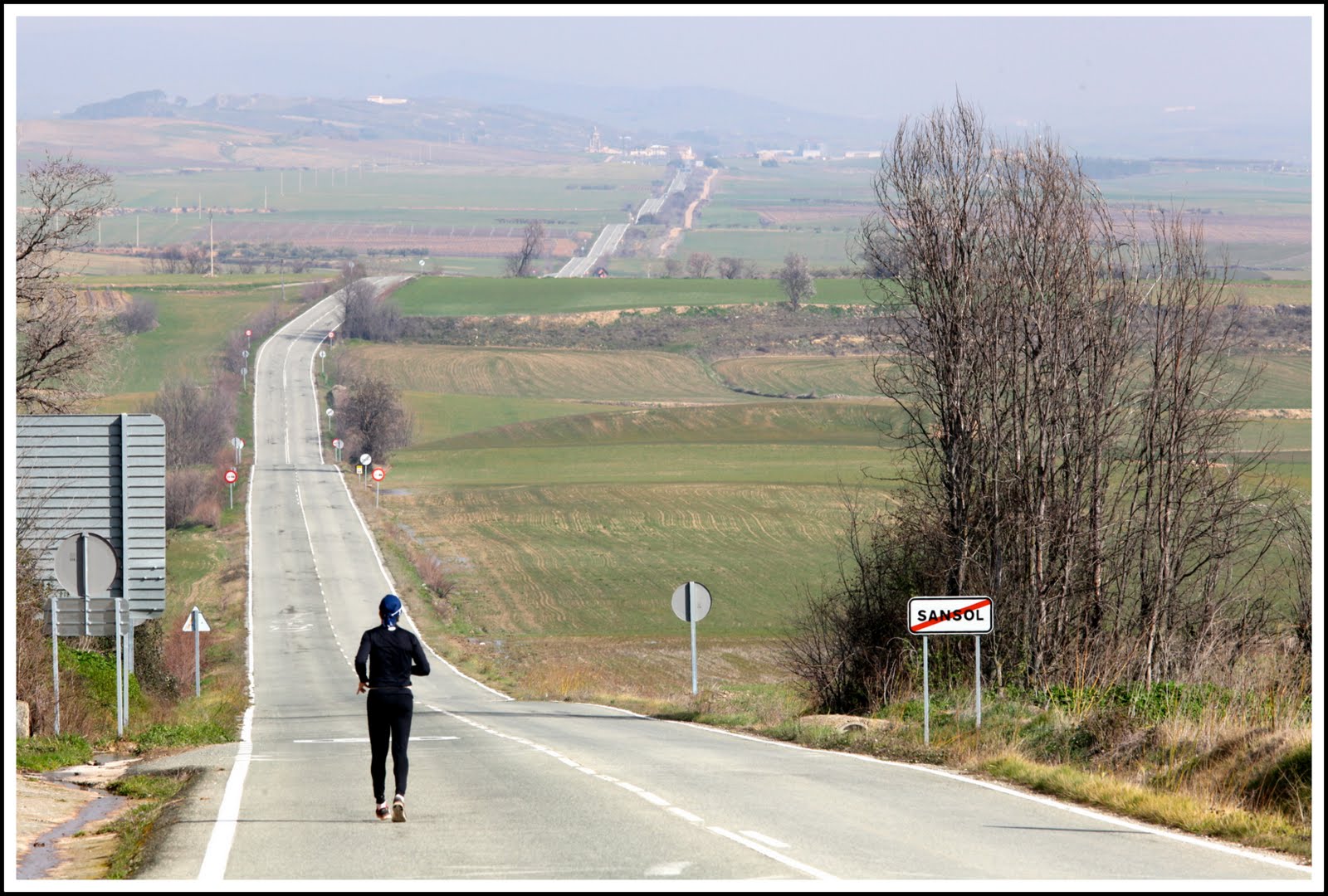 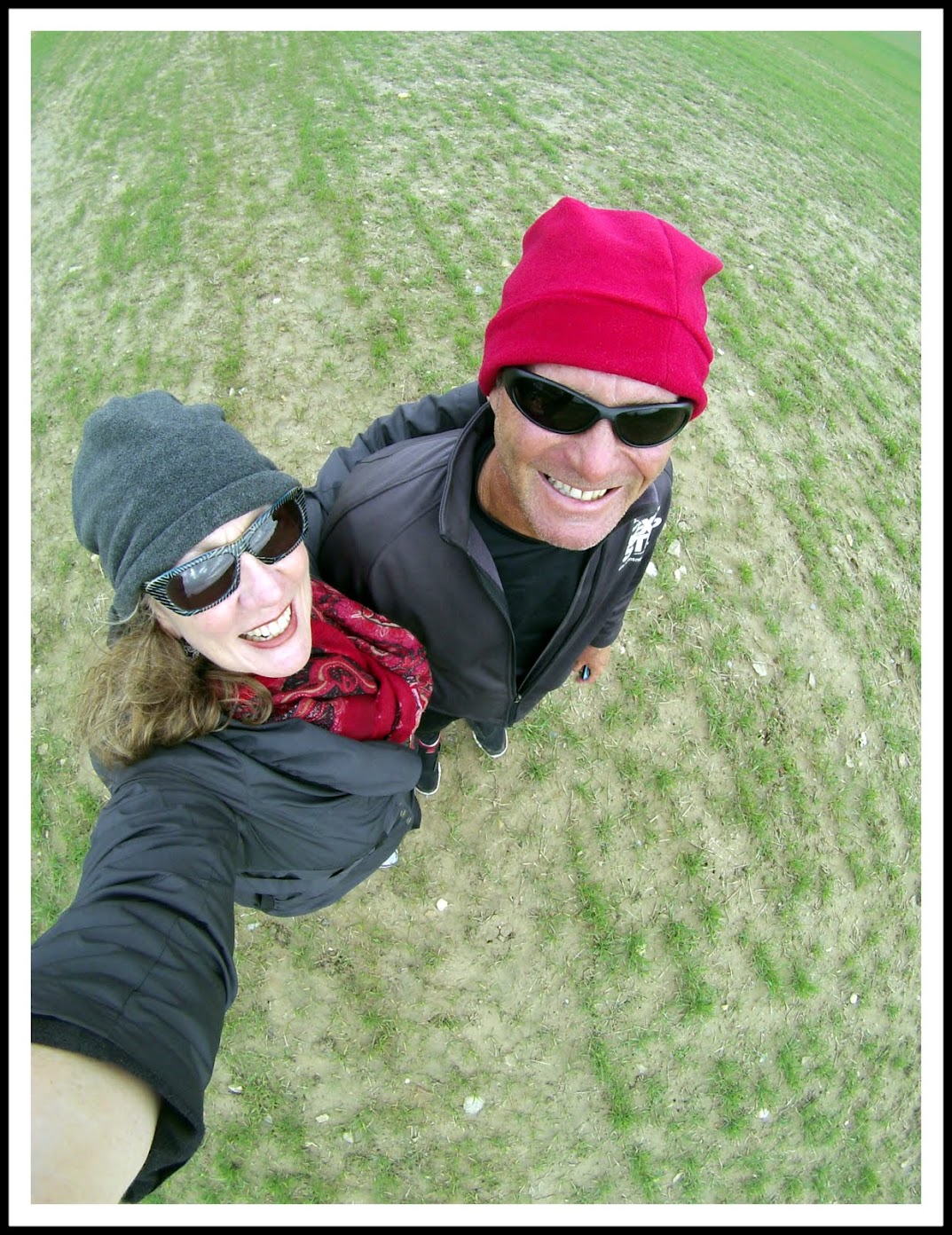 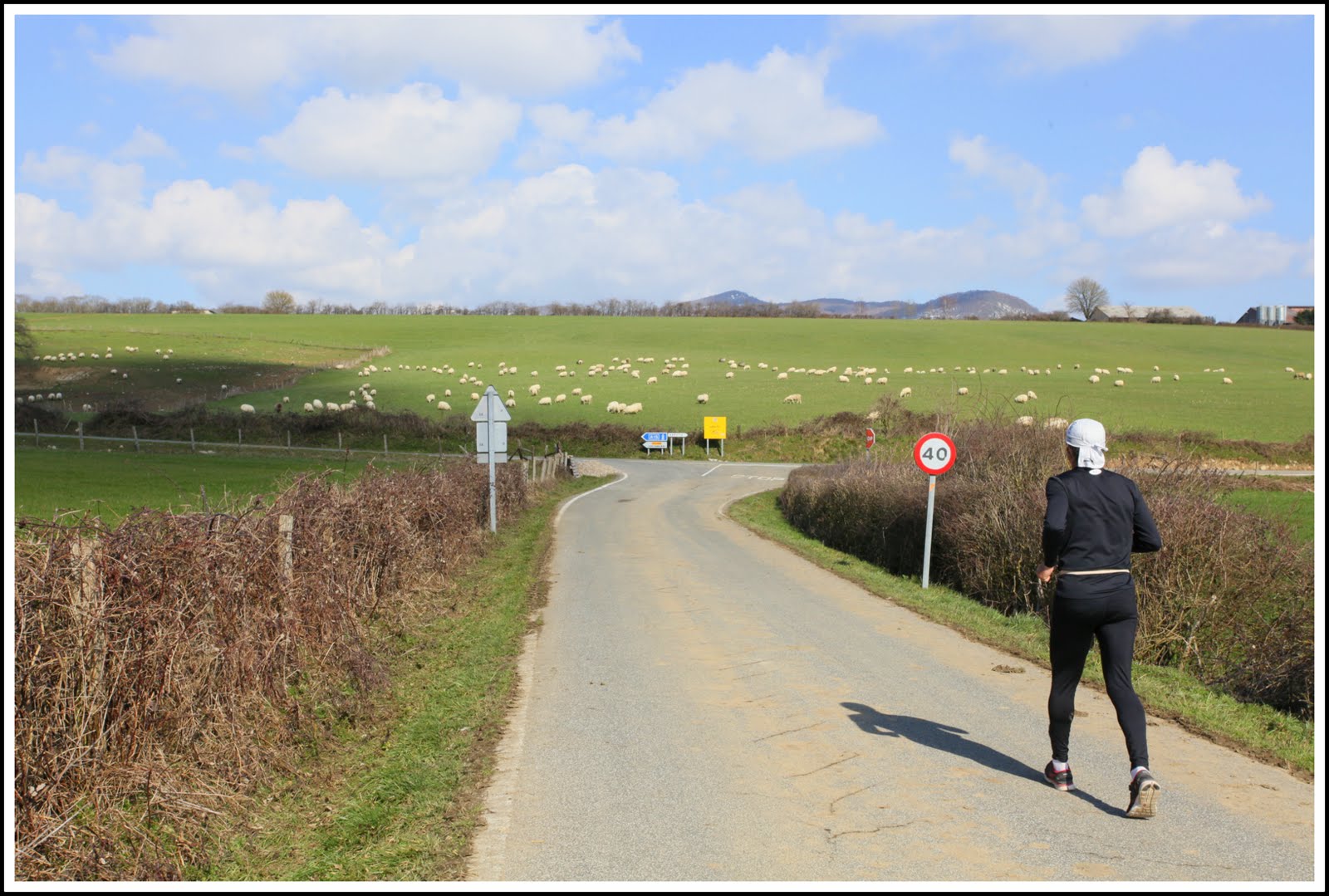