My calf injury now appears to be a thing of the past. Today I even managed to do a 200 metre “sprint” without any issues. Admittedly, it was quite slow (43 secs), but I felt good. I will now gradually increase the speed of my runs, throwing in more and more speed work in the weeks to come. I’m also going to add a regular long run, including this week. It’s still summer here and the temperatures all this week will be in the mid 30s C (high 90s F), so I think I’ll leave early to escape the worst of the heat.

The photo below is real – no trick photography or photoshopping. After running all day in the US during my world run, I turned on the TV in our motel room and found that Forrest Gump was airing. Carmel decided to snap a photo of me watching the movie. At the moment she took it, the caption at the bottom seemed to be a case of Tom Hanks addressing me with the line “You look tired, Forrrest”. How appropriate!! We thought it was hilarious. 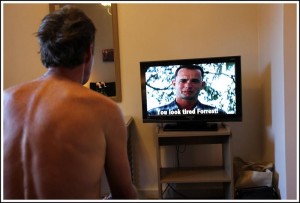 A very hot day today (for winter), with the temperature reaching 82 F, which is about 28 C. Always a bit of a challenge when you’ve been used to cooler temps.

I began the day just north of Guadalupe. I later learned that the sand dunes nearby are where the early movies requiring desert and sand dune scenes, particularly biblical themed movies like Ben Hur and the Ten Commandments, were filmed. The support crew drove out to have a look. Apparently the props were buried in the sand when they finished filming, but some are now exposed. Pity I missed it, but I had some running to do.

Early on a news crew arrived from KSBY to do an interview and some filming. That news item has already appeared on the nightly news.

The rest of my day was spent in reasonably remote environs. I passed through the Vandenberg Air Force Base (the public is allowed on the roads that pass through the base). This base is where many US satellites and rockets are launched, and I believe the space shuttle used to land here when conditions were adverse on the east coast. The base is an official NASA facility.

I finally survived the heat to arrive in Lompoc ahead of the support crew (first time so far), and am currently enjoying a cold beer.

I think I have worked out the problem with the Garmin data (don’t upload at the same time as logging in to Garmin). And the official distance for the day is 240 metres less than what today’s Garmin data is showing – I explored a back road before seeing a sign indicating all non US Air Force personnel were to keep out. So I had to turn back, but luckily I hadn’t gone too far, and only had a small amount to subtract from my total.

Well, let’s start where we finished off yesterday. After I was met by a group of runners from the Apalategui Sports Store, with various photographers from newspapers in attendance, I finished my day at our hotel, and availed myself of a massage, courtesy of the Hegalak Sports Center, situated just 50 metres away. It was my first massage since I started the world run, and Rosa did a wonderful job. Thanks Hegalak.

It was then on to the Apalategui store, where I met with proprietor, Felix, and the staff, and was given a free pair of running shoes and some running tops. I really appreciated this fantastic hospitality – they were all such nice people. One of the guys, Juan Mari, has a half-marathon PB of 61 minutes. That’s impressive, and would have been the world record holder not too long ago. I also met Spanish Nike rep, Albert, who happened to be visiting the store at that time. It was a very nice occasion, with lots of photos taken. We then headed off to have pintxos (the Basque version of tapas) and drinks – in my case, vino tinto. It was a great night, and I can’t thank them all enough, especially Felix.

San Sebastian, besides having such nice residents, is one of the world’s most picturesque cities. I’d rate it up there with Rio de Janeiro. This, combined with the culture and the “manageable” population size of 180,000, makes it, in my opinion, possibly the most livable city in the world – a big call, I know, but one I feel is justified.

The morning dawned bright and fresh, with a need for warm clothing as I ran out of San Sebastian. I got a sense that many people recognised me, as an article on my run had appeared in the main San Sebastian newspaper this morning. There were certainly a few honks of the horn as cars passed by.

I had a very enjoyable run, passing a couple of milestones. I crossed the border from Spain into France, chalking up my eighth country of the world run so far. I then passed the 400 marathon mark. Only 222 marathons to go.

I made it to Anglet, between Biarritz and Bayonne, within striking distance of the Atlantic for most of the day. Tomorrow, however, I’ll head inland, and will not see the ocean again until I reach Istanbul and the Bosphorus, although that’s not really an ocean. But it does represent the dividing line between Europe and Asia, and, therefore, the end of my European leg.