I managed to run 27 km this morning. It was quite tough due to the heat. I didn’t get away as early as I’d hoped, suffering as the temperature rose. It was also a hilly run too, with more than 1,000 feet of climbing. But I came through it fine, even if I was somewhat uncomfortable. A good sign for the future, particularly after the past couple of months.

Here’s another photo from the high plateau in Colorado during my run around the world. The temperature that day was perfect. How I wish I was out there today. 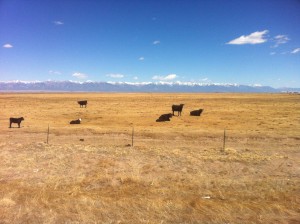 For those regular readers of this blog, you will recall I spoke previously about Tony Mangan, who is also running around the world (following a different course and different criteria to me). I also promised to introduce you to another – Jesper Olsen – who happens to be here in the US at the moment as well.

Jesper is an old hand at running around the world. This is his second time. In 2004/05, he run in a similar direction to what I am doing now. However, in 2008, Jesper began a north-south run, from the tip of Scandinavia, through Europe, the Middle East, and Africa. After taking nine months off to recover from injuries and illnesses he contracted in Africa, Jesper started again last year at the tip of South America, and is currently on his way to finishing in northern Canada. He is presently in South Carolina. It’s a great feat, and it is well worth following his adventures on www.worldrun.org.

Not exactly a white birthday, but there was some more snow falling today. Only very light, though. There was no wind, so it was really quite pleasant.

It was a big day – one of my longest in the past year. I reached Pau, a city that regularly sees the Tour de France, and it also saw the Tour de Bois back in 2009, when Dave, Chips, Klitty, and I rode through here. We even stopped for a couple of pizzas for lunch.

Besides being my birthday, I also reached another milestone today – 17,000 km for the run so far. Carmel arranged for a small celebration as I passed that mark.