More videos today, from around the time of my birthday back in 2013, when I was running in snowy conditions in the south-west of France. It wasn’t as bad as it might seem, although my feet always got wet and remained so for the rest of the day. But, when you’re running, your feet don’t have time to get too cold.

A couple of years ago I decided I wanted to do a 10 km time trial each birthday, but I haven’t managed to do that the past two years due to my right heel not being up to it. It’s prevented me from putting in the necessary work to ensure a half decent time trial. Hopefully I’ll get to do at least one 10 km time trial each year at some stage. Last year I did manage a 42:24 in September. Will I ever be able to run that fast again? The jury is out on that one.

Well, let’s start where we finished off yesterday. After I was met by a group of runners from the Apalategui Sports Store, with various photographers from newspapers in attendance, I finished my day at our hotel, and availed myself of a massage, courtesy of the Hegalak Sports Center, situated just 50 metres away. It was my first massage since I started the world run, and Rosa did a wonderful job. Thanks Hegalak.

It was then on to the Apalategui store, where I met with proprietor, Felix, and the staff, and was given a free pair of running shoes and some running tops. I really appreciated this fantastic hospitality – they were all such nice people. One of the guys, Juan Mari, has a half-marathon PB of 61 minutes. That’s impressive, and would have been the world record not too long ago. I also met Spanish Nike rep, Albert, who happened to be visiting the store at that time. It was a very nice occasion, with lots of photos taken. We then headed off to have pintxos (the Basque version of tapas) and drinks – in my case, vino tinto. It was a great night, and I can’t thank them all enough, especially Felix.

San Sebastian, besides having such nice residents, is one of the world’s most picturesque cities. I’d rate it up there with Rio de Janeiro. This, combined with the culture and the “manageable” population size of 180,000, makes it, in my opinion, possibly the most liveable city in the world – a big call, I know, but one I feel is justified.

The morning dawned bright and fresh, with a need for warm clothing as I ran out of San Sebastian. I got a sense that many people recognised me, as an article on my run had appeared in the main San Sebastian newspaper this morning. There were certainly a few honks of the horn as cars passed by.

I had a very enjoyable run, passing a couple of milestones. I crossed the border from Spain into France, chalking up my eighth country of the world run so far. I then passed the 400 marathon mark. Only 222 marathons to go.

I made it to Anglet, between Biarritz and Bayonne, within striking distance of the Atlantic for most of the day. Tomorrow, however, I’ll head inland, and will not see the ocean again until I reach Istanbul and the Bosphorus, although that’s not really an ocean. But it does represent the dividing line between Europe and Asia, and, therefore, the end of my European leg.

The day was one of blue skies in the morning, but they had turned to grey by the afternoon, and with it came some snow. It was only quite light, and without any wind, the flakes were gently fluttering to the ground as I ran.

I ran on roads today that I have some familiarity with. The second half of the day was along the D936 and others – roads that Dave and I had ridden 18 months ago, and he and I, along with Chips and Klitty, had ridden in the reverse direction in 2009. It was a touch strange now running these same roads without my mates. Then again, it was these exact roads that I had to ride, unbeknownst to me, with a 3 litre Coke and a brick in my panniers, courtesy of Klitty’s sense of humour – they weren’t my mates on that occasion.

I reached Salies de Bearn after a long day, with the snow continuing to fall softly. This is our third time here in less than four years. Carmel celebrated her birthday here in 2009, and I will tomorrow. BTW, the region is where Bearnaise sauce comes from – one of my all-time favourite condiments. The town also hosted the start of a stage of the Tour de France a couple of years ago.

So, I’m now dreaming of a white birthday, just like the ones I never knew.

Not exactly a white birthday, but there was some more snow falling today. Only very light, though. There was no wind, so it was really quite pleasant.

It was a big day – one of my longest in the past year. I reached Pau, a city that regularly sees the Tour de France, and also saw the Tour de Bois back in 2009, when Dave, Chips, Klitty, and I rode through here. We even stopped for a couple of pizzas for lunch.

Besides being my birthday, I also reached another milestone today – 17,000 km for the run so far. Carmel arranged for a small celebration as I passed that mark (see the photos).

PS Not too many photos today, as the highway was a bit monotonous and not conducive to artistic variety.

It started snowing in earnest last night, and everything was white this morning. I guess that counts as a white birthday. Thanks to everyone out there who wished me a happy birthday for yesterday.

It made for a very different run, with the lots of flakes gently drifting to the ground, and the tree branches glistening white. I was well rugged up, so I wasn’t feeling cold at all – it was just the right temperature.

I passed another couple of milestones during the day. The minor one was reaching 150 km of accumulated vertical ascent. That’s like running to the top of a mountain that is 150 km high. Or, more realistically (if you can call it that), running from sea level to the top of Mount Everest and back seventeen times.

The more important milestone was crossing the Greenwich Meridian. I am now running in the Eastern Hemisphere for the first time in over a year. It’s nice to know I’m now back in my own half the world.

It snowed all day – not a single let up – although mostly it was light. However, it got quite a bit heavier by mid-afternoon, which resulted in Carmel losing me. After a protracted effort, she finally located me again, at which point I decided to call it a day. Shorter than planned, but still a good day considering the conditions.

Right near the end, I dropped my Garmin in a fast flowing gutter. It was completely inundated for several seconds. It seemed to go a little haywire for a time, but appears OK now. And the data seems fine too. Phew, that’s a relief. 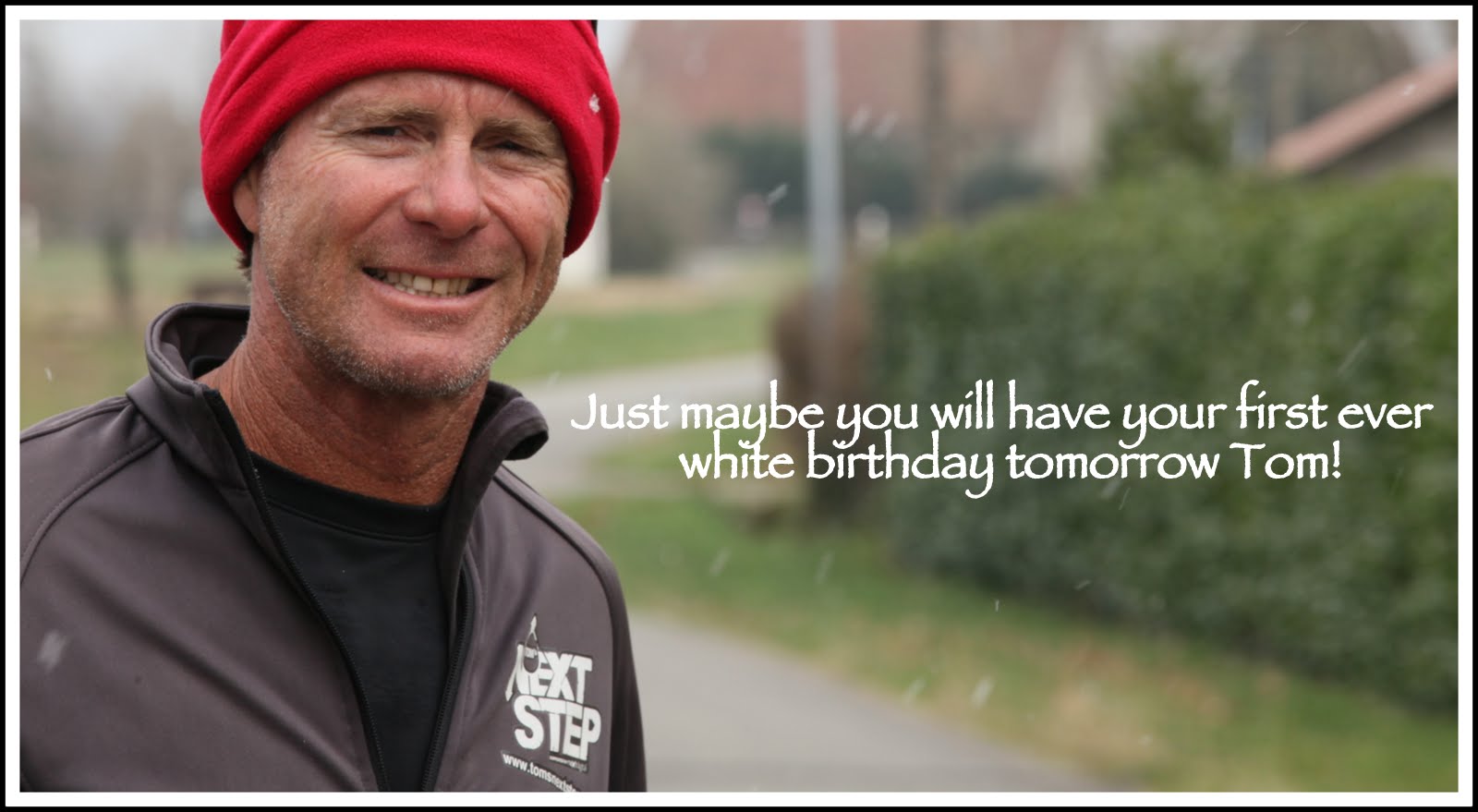 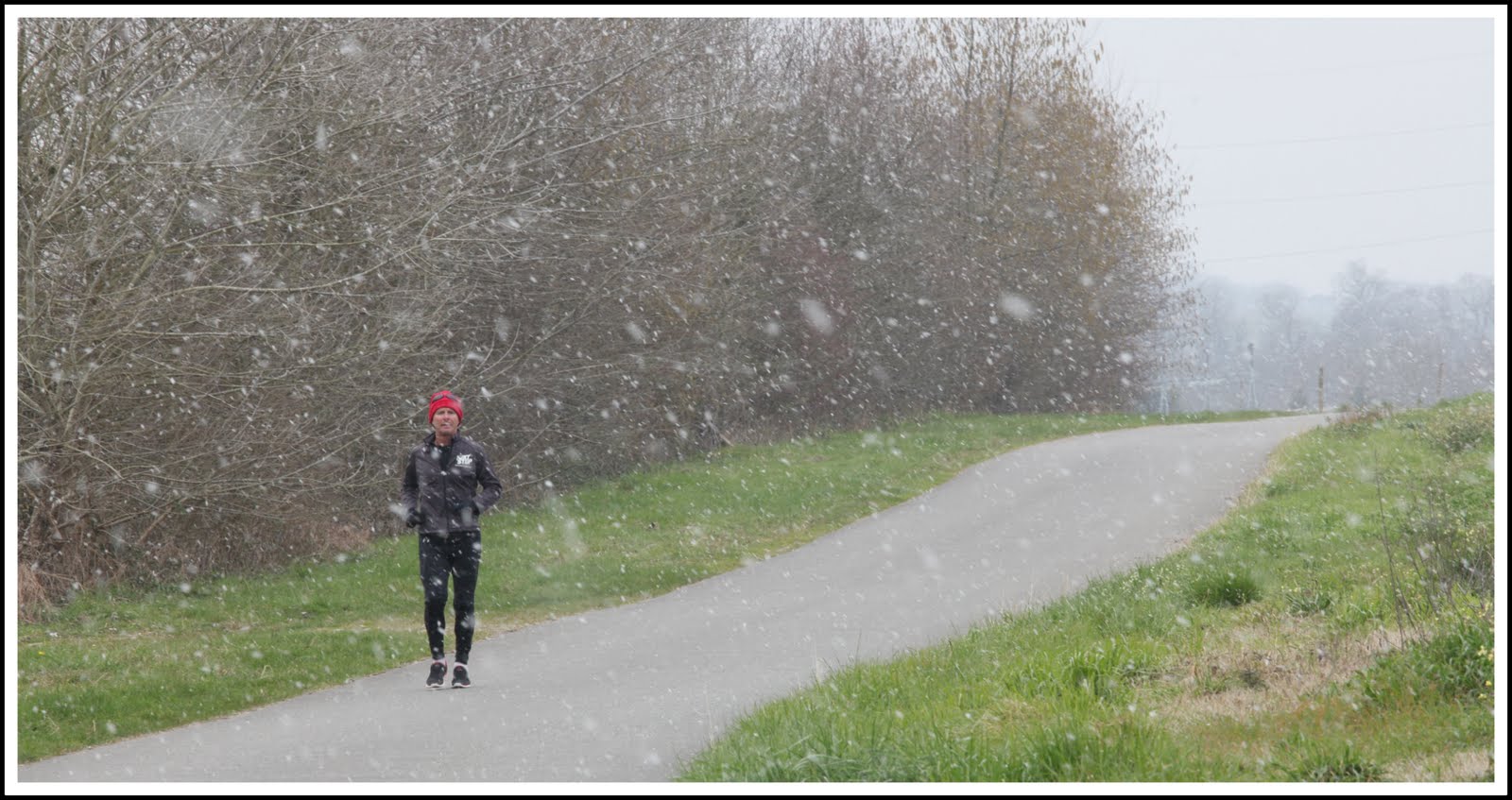 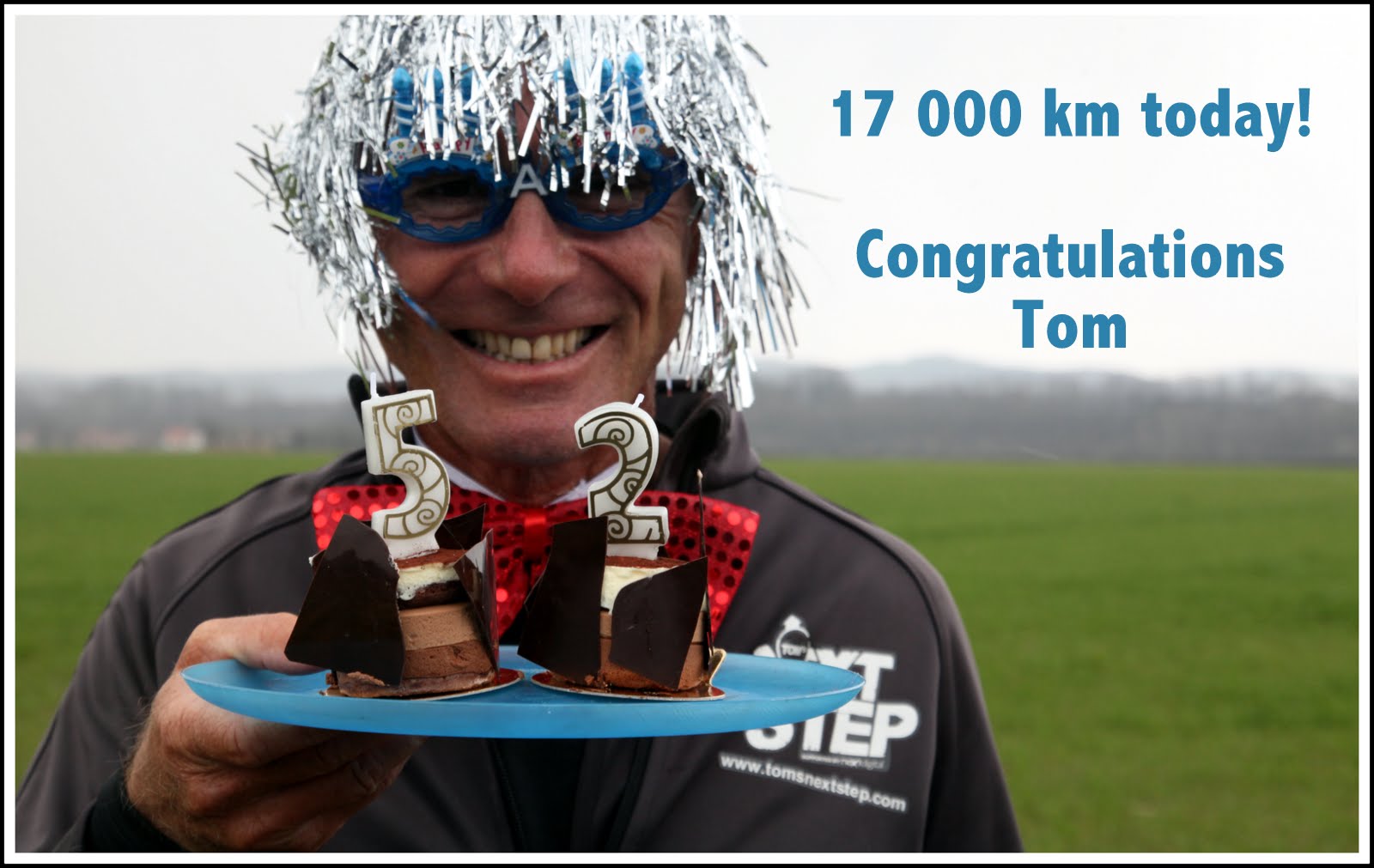 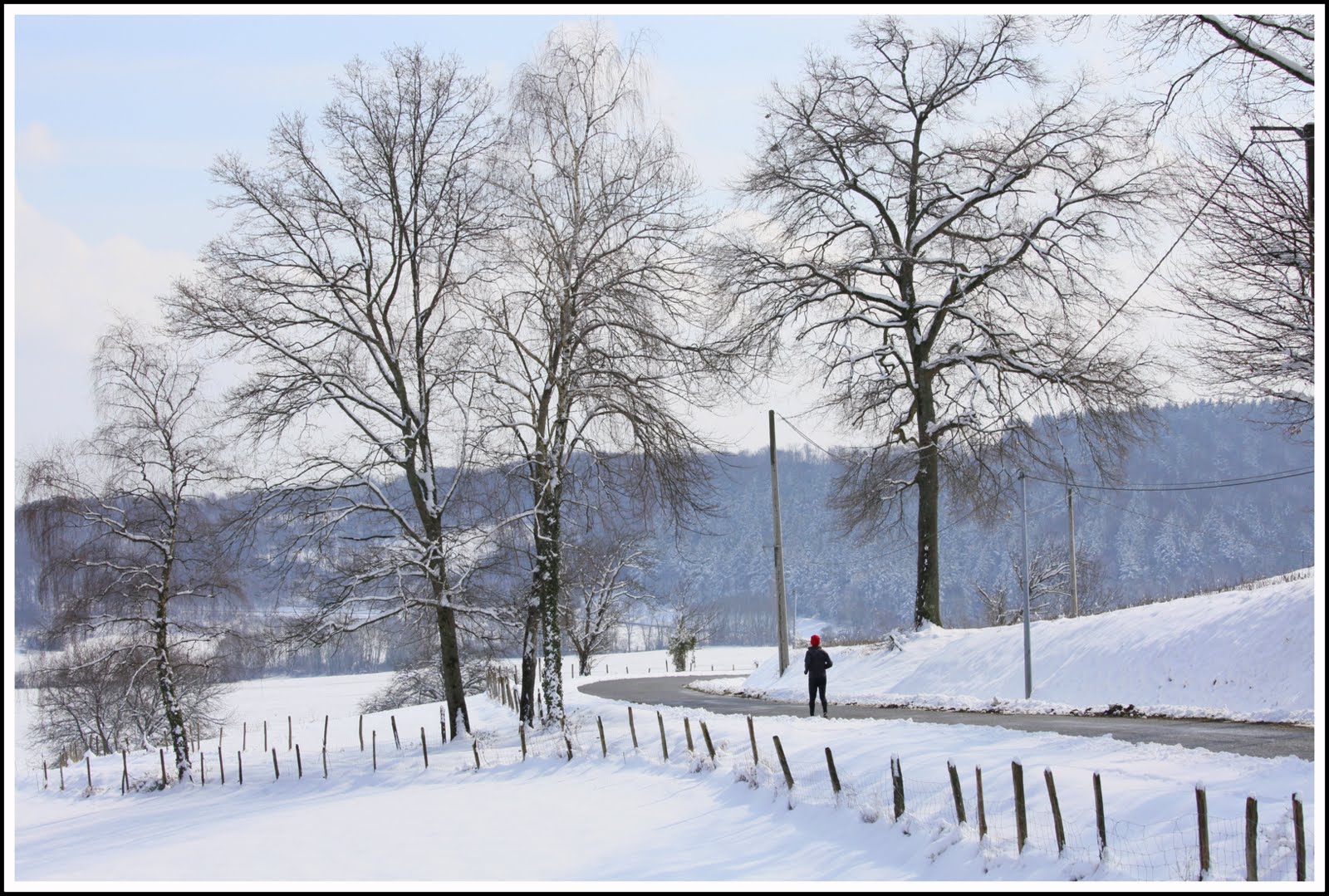 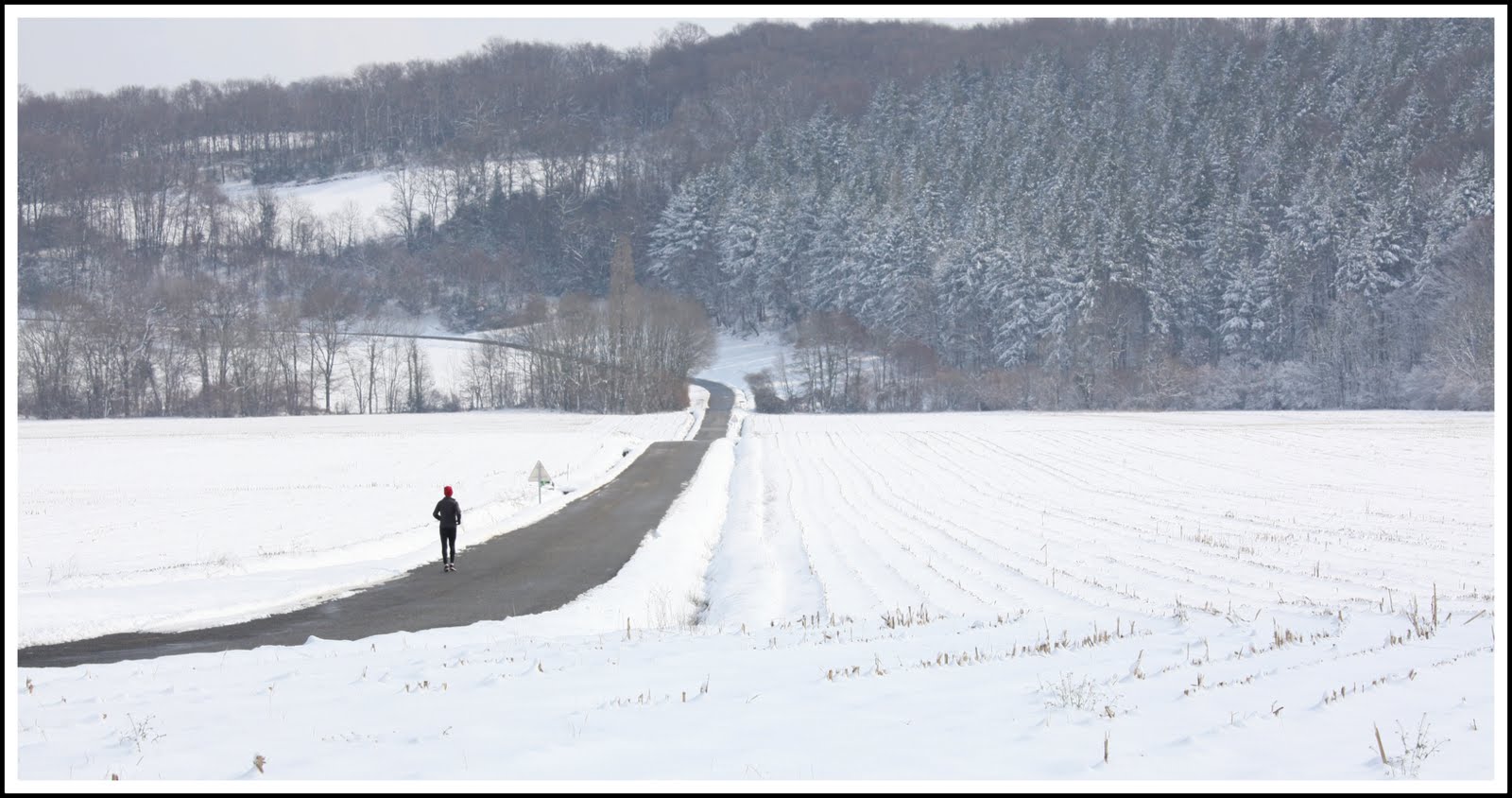