With the upcoming race on King Island less than two weeks away, I thought I’d better do a long run. So I did my longest run since the 114 km I ran in 12 hours back in August. Today it was only 40 km. However, it was at a decent pace, including the final kilometre in a tick over five minutes. In fact, I generally got faster throughout. And that’s how I intend to run the race on King Island.

I really don’t know what to expect in this race. I have no idea what the quality of the field is like, other than that one of the Australian womens marathon team from the 2012 London Olympics will be in the race. That’s definitely one person who’ll be finishing in front of me. I suspect there’ll be many others.

I often say something to the effect of “here’s a photo with a difference”. Well, this one really qualifies. This is Carmel, Libby, and Jenny in the “green room”  of a Phoenix television station, having their photo taken with Joe Nicholls (while I was being interviewed live – you can see me on the TV in the background). Joe Nicholls is one of the best known country musicians in the US, and he was being interviewed just prior to me. The girls had no idea who he was and initially asked him if he could take a photo of them. He naturally assumed they wanted a photo with him and was embarrassed when he realised they wanted him to just take the photo. Someone else then told them who he was, so the girls got a photo with Joe as well. I thought it was all hilarious when I found out after my interview. 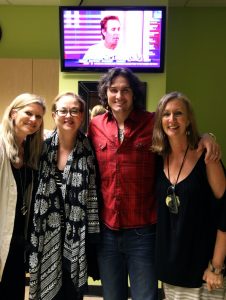 It was a stunningly beautiful start to the day – a crisp and clear morning, with mist rising everywhere from the evaporating frost. You’ll see what I mean when you check out today’s photos.

The first half of the day entailed a lot of hills like yesterday, but the afternoon was mainly flat through a valley. It was a very quiet road, which I appreciated greatly – pretty close to a perfect day for running.

I finished in the town of St Elix le Chateau, where there happens to be an old chateau (surprise!). I was expecting to have to commute some distance to the nearest accommodation, but Carmel saw a sign indicating a local chambre d’hote. So, we’ve ended up in a wonderful old French farmhouse, full of antique furniture and original trimmings. It makes for a nice change from a hotel room. A lovely French couple are our hosts, and I can smell dinner cooking already -mmmmmmm!!!!