I’m still struggling with my running in the heat and humidity of Sydney at the moment. I’m sure that’s the issue, as I was feeling great down south in the cooler and drier conditions. In fact, we just experienced the hottest January in recorded history in Sydney (beating the previous average daily record by an entire degree Celsius – 1.8 deg F). And February is predicted to be the hottest ever month of all time. It certainly has started like that will be the case. But it’s not just the heat. It’s the humidity as well. Within minutes of beginning a run I’m completely soaked. Past years have been bad. This year seems to be much worse.

I have something a little different to mention today. During the week I was contacted by Liz Vassey, who has been an actor for many years (she has appeared as a regular in series such a CSI, ER, and Two and Half Men, along with many others). Liz is also an avid runner and will be making a documentary about runners over 50, and how there is no reason why one should have to give up running due to age – something in which I firmly believe. I’m also a big supporter of making of this documentary.

Funding for the documentary is being raised via crowd funding. You can find detail regarding the documentary, including the crowd funding site courtesy of the following links. Please forward these links on to all your running friends, or anyone else you feel might be interested. I’ll keep readers updated on the progress of the documentary from time to time.

To finish this post, here’s a photo taken in Colorado on a cold day during my world run. It snowed a little later that day. I’d choose a cold, snowy day any time over the conditions I currently have to run through in Sydney. 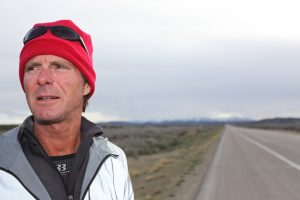 The early day was uneventful, until the drama described above. Soon after that I stopped for a dog’s eye for lunch, then hit the frog and toad again. Eating and running usually results in nature calling, and I soon found myself needing to look for a place for a Lorraine (sometimes called a Johnny Tapp). One place looked promising, except there were a couple of tin lids playing nearby. I moved on and found somewhere that looked perfect. I was about to drop the dacks when I spied a row of bee hives (that’s not rhyming slang – I mean real bee hives). I could just see the headlines “Runner stung on Kyber Pass while attempting a Brad Pitt”. I hightailed it out of there, and continued my search. Needless to say, everything eventually turned out OK and I finished strongly with another 50+ km. Once I got back to our accommodation I cracked open a Terry Dear, and started writing this Rodney Hogg.

I had my flattest day so far in Europe. There was hardly a hill in sight. It was another long one, but I felt good, particularly towards the end.

It was great to begin the day by running out through the tunnel section of a castle. I imagine there once were big gates to keep invaders out. We discovered that Somerset Maugham once stayed in that very castle, and there is a strong chance his “corner room” was the same one we slept in.

The run took me on more gravel “service roads” beside the freeway. I was glad when I reached the end of that section as I entered the large town of Talavera de la Reina. It looked to be a major commercial and industrial town, so I couldn’t recommend it to the tourist.

The last 15 km was on a very smooth and flat road, and I was able to get into a real rhythm. I’m hoping tomorrow will see more of the same.

For some reason, the tracker appears to have stopped working. I have just noticed that it updated correctly till about mid morning and, although it seems to be working on my phone, the updates are not appearing on the web site. I assume there must be a problem on the FollowMee website. Hopefully it will be corrected soon. My real position is further to the east than the tracker is showing, at the town of Cebolla.

PS The winner of the trivia question from two nights ago was Bernie Breen, although there were many others who answered correctly.  Of course, February 3 was the 54th anniversary of the plane crash that killed Buddy Holly, Richie Valens, and the Big Bopper – what Don Maclean came to coin as “the day the music died”.